School might be out for summer, but for two local students, summer means a chance to work on their athletic skills and improve on what are already amazing achievements.

Gracie Reeves just finished eighth grade at St. Francis Xavier School. The North Central youth excels in gymnastics and at the spring regional competition she took second place in both the bars and beam, fourth place in the vault, ninth place in floor and then was selected for first place All Around Athlete. She beat out athletes who came from four states—Arizona, California, Nevada and Utah—to compete at the 2015 Classic Rock Invitational, held in Phoenix. 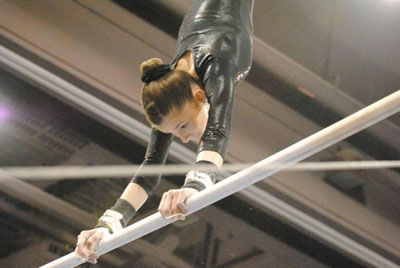 North Central youth Gracie Reeves competes on the high bar at the 2015 Classic Rock Invitational, held in Phoenix. She took first place in the All Around (photo by Lauren Stevens).

This qualified her for the national meet in Spokane, Wash., which was held the first week of May. The young gymnast took second place in the floor and third place, All Around Athlete.

“Nationals was really exciting and fun,” she says. “It was a really cool experience. There were a lot of people there; it kind of motivated me more.”

Gracie has been involved in gymnastics since she was little and now has, she estimates, 300 medals hanging in a closet at her home.

“I am proud of how she handles everything; when she’s stressed she still works hard and smiles, and when she’s tired, she still makes time for others and expresses her gratitude,” says her mom, Melissa. “As a child … she was a monkey who loved to climb. She was constantly practicing on her beam in our living room to the point where we had to force her to read or sit down. She always wanted to perform for us and the common words out of her mouth were, ‘Mom, come watch me!’”

During the school year Gracie trains at the Arizona Sunrays center from 1:30 to 6:30 p.m., with Wednesdays and Sundays off. Gracie calls her coach and teammates her extended family. “The girls become your sisters and the coaches are really nice and supportive.”

During the school year she splits her focus between academics and gymnastics. “It’s a fun sport that involves a lot of dedication,” she explains. And despite how loud her friends and fans cheer, when Gracie is on the floor or on the bars, she has a laser-like focus. “I go into my zone and focus on what I’m doing.”

As busy as she is, Gracie likes to draw and ride her bike. Summertime means she can get manicures and pedicures, which are big treats for her.

This summer Gracie will go on a family vacation to Park City, Utah, and while there she’ll workout in a gym to keep up her conditioning. After her vacation she plans on working on her skills to get to the next level. She doesn’t mind the summer practice.

“It’s really fun, especially if you’re working on a skill and you finally get it. It makes you feel great that you finally accomplished your goal!”

In the fall Gracie will go to Horizon High School—where some of her fellow gymnasts already attend—and hopes to get a scholarship and perhaps attend the University of Utah.

When North Central teen Evan Pittman was just 2 years old, his mother, Rebecca Feaster, remembers first noticing his strength and thought he’d grow up to be a linebacker. But by the time he was 11, he was already power lifting and breaking and setting new records.

“He handles himself differently than other kids,” says Martin Drake, chairman of Amateur Athletic Union, the oldest and largest amateur sports organization in the country. “When he sets a record, he does it with humility.” 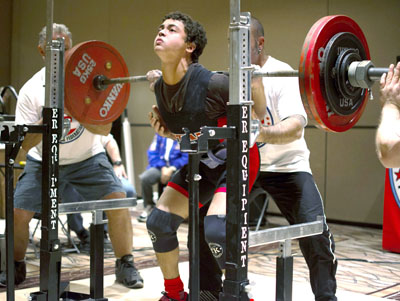 At first Feaster admits to not being too thrilled with the sport, concerned that Evan, 16, would get injured. And then he did. But she was in for a surprise when the doctor told her it wasn’t because of weightlifting but, rather, due to his playing the violin. Evan, who is in the 10th grade at Phoenix Country Day School, also is an accomplished musician. So today he does a series of stretches for his left shoulder to make sure he’s not straining himself.

Evan also is a competitive diver. “I really like diving,” he says. “Being alone on the board is very nerve-wracking. You’re all by yourself. You can make it beautiful and perfect or you can smack your back on the water.”

He says it’s important to not dwell on each back or belly flop. “If you keep thinking of the past, it won’t help.” Instead he says he focuses on, “What can I do differently? Now move on!”

Evan currently has 89 world records and dozens upon dozens of U.S. records in power lifting. He has 11 more records to go to make his 100 world-record goal and plenty of time since he’s still two years away from turning 18. “I’m sure it will happen,” says his dad.

This summer Evan will compete in the Junior Olympics, where’s he likely to set a few more records. His parents have created a fun website for his family and fans to track his progress. You can, too, by visiting www.worldsstrongestviolinist.com.