Home / Features / Too much citrus draws in roof rats

Too much citrus draws in roof rats

By Teri Carnicelli
The overabundance of citrus this winter and spring may seem like a happy circumstance for those who enjoy spending hours squeezing oranges and grapefruits, or making tasty desserts with lemons and limes. But for some North Central residents, the windfall of citrus marks the return of an old nemesis: the roof rat.

Roof rats were first discovered in the Arcadia neighborhood in 2002. Not native to Arizona, the rats are believed to have been transported to Maricopa County from one of Arizona’s neighboring coastal states. They soon spread to different areas of the Valley, including North Central Phoenix.

Although roof rats have not been found to have disease, they are known to be very destructive, gnawing through wiring and causing other damage if they make their nests inside your home.

Erick Johnson, who lives near Central and Northern avenues, points out that “roof rats love North Central because there’s plenty of food here—especially ripe citrus that is left on the ground. You don’t want to give them a reason to like your yard, because they often take up residence in attics, storage sheds and the like.” 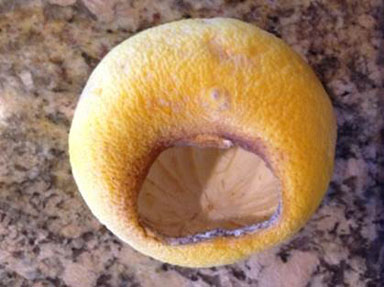 After finding gnawed and even hollowed-out grapefruits in his yard, North Central resident Erick Johnson knew he had a roof-rat problem (photo courtesy of Erick Johnson).

Johnson and his family spent two weekends stripping all their orange and grapefruit trees after discovering some gnawed-on and even hollowed-out grapefruits on the ground in their yard. A good portion of the ripe fruit was given to the Desert Mission Food Bank; the rest was either consumed by the family or given to friends.

Homeowners should note that St. Mary’s Food Bank in March notified the public that it can no longer accept citrus donations this year. St Mary’s estimates conservatively that the Valley produces somewhere in the neighborhood of 8 million pounds of citrus each year on residential trees. In 2014, the food bank collected about 2 million pounds from 631 homes. After registering 500 homes for 2015, the food bank stopped registrations.

Due to new federal regulations, St. Mary’s can no longer ship citrus to other states to trade, so that has put a limit on the amount of citrus that it can now collect. At its peak, the food bank once collected 4 million pounds per year. But now, much of that excess citrus, and what to do with it, is the responsibility of the homeowner.

Johnson is worried about other homeowners in the neighborhood who have multiple citrus trees and may not be as diligent when it coming to keeping their ripe fruit picked and the fallen fruit cleaned up off the ground.

That’s because a rat will typically travel the distance of three homes/yards in every direction to find food and water. So even if you don’t have food and water for them in your yard, rats may live at your property.

To help deter roof rats, don’t leave pet or bird food outside and get rid of any standing water, such as a birdbath. Keep garbage containers tightly covered, and if you have dogs, keep the feces picked up in your yard.

Greg Peterson, owner of the Urban Farm in North Central Phoenix, says that he talks to hundreds of people every month about growing food in their yards and “rarely if ever does the topic [of roof rats] come up.”

“I usually see more damage on citrus from birds, believe it or not,” said Peterson, who is a noted speaker on many aspects of sustainability, green living and permaculture. “Do we have roof rats in the neighborhood? Sure. The only problem with roof rats is if they get into your house. Our job is to make sure that our house is sealed so they can’t get in.”

If you already have spotted signs of roof rats in your yard, there are different ways of keeping them out of your home. One is to simply cover or block all access points into your home, particularly your attic. A simple wire mesh over vent pipes and holes often can do the trick.

Snap traps (designed with a trigger mechanism) can be purchased at home improvement stores or pest control businesses such as Bug & Weed Mart. Snap traps should be baited with a food source, like peanut butter, and will kill the rat as it attempts to eat the bait. They can be emptied and re-set after each successful use. Snap traps are recommended for use in areas where bait stations are not feasible, such as inside the home.

If using poison bait, be sure to secure the bait in a Personal Use Bait Station (PUBS) or a commercial bait station that keeps pets, wild birds and children safe.

According to www.roofrat.net, the bait station is “ideal for people who have lush landscapes, unpicked citrus, pecan trees, figs, date palms, pomegranates, apples, peaches, apricots, as well as any human or animal food source.”

For more information about roof rats, visit www.maricopa.gov/envsvc and click on the Vector Control Division. Note: Maricopa County does not provide bait stations or traps to the public.