By Patty Talahongva
If you’ve ever wanted to learn more than just saying “hello” in a foreign language, perhaps 2015 will be the year you achieve that goal. Whether it’s a New Year’s Resolution or perhaps a job requirement, there are three schools in the area that offer classes for kids and adults in a variety of languages including Spanish, Mandarin, Russian and even Arabic.

There are even classes for English as a second language students to learn how to reduce their accent, making them more understandable in English. 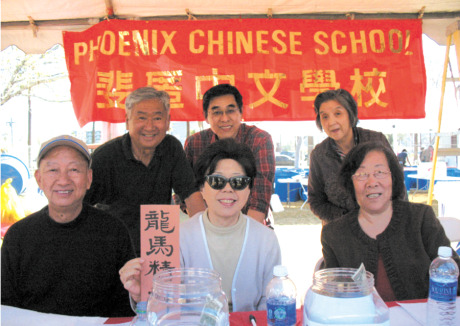 At the Phoenix Chinese School, 734 W. Elm St., you can learn either Mandarin or Cantonese in generally small classes. The Phoenix Chinese school started in 1989 and is operated with support from the Chinese United Association of Greater Phoenix (CUAGP) and other donations. David Cui is the principal.

Being able to feel comfortable and confident when speaking a foreign language varies with each person, although children tend to pick up foreign languages quicker. Jianhua Wang Hilgaeretner’s son attends a children’s class. “There is a young girl in my son’s kindergarten Mandarin Chinese class. She is from an Hispanic household and has no other Mandarin speakers in her household,” she explains. “After completing only one semester, using three textbooks, she can speak with my son in conversational Chinese and can write about 35 characters.”

Her son is biracial and his father Jeff says their son enjoys learning Mandarin in a group setting. “My son Wilson looks forward to his Mandarin class with great excitement. He really enjoys an atmosphere where he receives structured formal lessons from an engaged and caring teacher. A sense of community frames the school and I look forward to my son being involved with it for years to come.”

The school caters to all ages and levels of speaking ability. Your personal goals are reviewed so if you want to learn enough Chinese to travel around the country comfortably, you can do that, or you can become fluent and get a job as a translator. Such job opportunities exist for multi-lingual individuals ranging from translators to direct business negotiators. “Speaking Mandarin or Cantonese will be a major asset to employers,” says Jianhua.

However, if you only wish to learn about the Chinese culture, you can also do that. Cultural classes are offered in the late afternoons and include an art class with Chinese painting styles, a Kung Fu class and a calligraphy class. The school will again offer Guzheng, a Chinese string instrument, class. You can also learn how to use an Abacus or learn the various styles of Chinese dance. Dance classes require a minimum of three students.

Classes at the Phoenix Chinese School will start on Saturday, Jan. 3. Class times are from 1:30 to 3:30 p.m. and will be held every Saturday, with breaks for the Chinese New Year and spring, and conclude on May 2. You can call 602-285-5670 to learn more about the classes and cost.

Dr. Glen Gray and his wife, Peggy, recently purchased the Arizona Language Institute, 13832 N. 32nd St., from Dr. Alex Shore. Their first semester of classes will start on Jan. 5. The lesson prices depend on the program, for example a part-time English class that includes four weeks and 24 lessons will cost $375.

Peggy Gray worked at the school for six years before she and her husband purchased it. She says people who have made a new year’s resolution and are serious, sign up and follow through. “Once they register and take the test they follow through,” she says. Everyone is given a placement test to make sure they are in the right class and level of learning.

Foreigners who come to work in the United States and don’t feel they’re being understood can also take classes to reduce their accents. The institute will take older teenagers, but no children. The classes are all geared for adults and you never know who might be in class with you. In the past they’ve had a Russian Olympian and a priest from the Vatican enrolled in classes there.

Foreign Language classes are offered in five levels: Low Beginners, High Beginners, Intermediate 1, Intermediate 2 and Advanced. Some of the languages being offered are Arabic, French, Hebrew, Russian and on request they also offer Korean and Portuguese. They are also looking for teachers who can teach Mandarin Chinese.

You can call 602-765-497 for more information or email the school at  arizonalanguageinstitute@gmail.com to get enrolled.

At the Interlingua language school, 5107 N. 7th St., you can actually create your own class with four friends. The focus here is on Spanish, from conversational to business, and even translation work for the medical field and legal system.

Yolima Otàlora is the director of Interlingua, which has been in business for nearly 30 years. Like the Chinese School, Interlingua mixes culture with language lessons and uses the arts and music as a way to learn the subtleties of the language. In addition, you can take immersion classes in Spanish spoken in Argentina, Costa Rica, Ecuador, Guatemala, Peru and in Cuernavaca, Mexico. Prices vary so call to see which class works best for you.

Every student is tested to see which level will work best for their needs. You can learn more by calling 602-274-4441 or visiting www.azinterlingua.com.

Don’t forget to check with your employer to see if they offer tuition assistance for learning a second language.