By Patty Talahongva
Guy Anderson, 49, is on 11 medications for chronic back pain, among other ailments. He typically has to make multiple trips to the pharmacy, sometimes in just one month, for refills. But SB 1288, the Medication Synchronization bill, is changing that for him and millions of other patients.

The new law will allow pharmacists to fill all of a patient’s monthly medications on the same day, preventing multiple trips and missed refills. In the past, multiple prescription refills on various days imposed a hardship for many patients. In most cases, pharmacists were prohibited from moving the dates or adjusting the amount of medication offered for refills to accommodate patient needs due to insurance regulations or the increased cost to the patient. 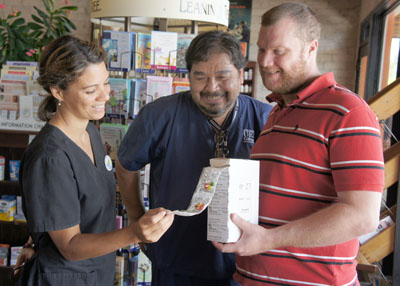 Theresa Stickler, owner and pharmacist at Melrose Pharmacy, demonstrates one of the new services offered to customer Jared Nations, right, and his partner Miguel Valverde, who himself is a pharmacy technician. Along with medication synchronization, which allows patients to have all their prescriptions refilled on the same day, Melrose Pharmacy also offers the MyOnePac box, in which a customer’s medications come organized by date and time, securely sealed in easy-to-open packages. Each package shows everything a customer needs to take the right medications at the right time (photo by Teri Carnicelli).

Arizona Gov. Doug Ducey signed the bill into law in April and it will take full effect on Jan. 1, 2016, but pharmacists can start synchronizing their clients’ prescriptions now.

“It affected me pretty hard,” says Anderson, who used to have to go to multiple pharmacies to get all of his medications. He prefers a small, locally owned pharmacy like Melrose Pharmacy because they know him. “It’s a family pharmacy,” he explains. He also likes the new law because it will allow him to drive less, which will be helpful for his chronic back pain.

“We’ve signed up about 175 people so far,” says Teresa Stickler, owner of Melrose Pharmacy at 706 W. Montecito Ave., adding that number will increase as people become aware of the change in the law.

Stickler testified before state legislative committees about the need for the new law, dubbed “med-sync.” Stickler says patients who have more than two medications have to keep close tabs on their refill dates but in some cases patients let several days lapse between prescriptions because it was just too difficult to get to the pharmacy.

It’s not just the patients who benefit. Stickler said the law also will make it more clear as to what medications need to be refilled on certain dates and thus prevent a potential shortage in supply at the pharmacy. “The patient is given what they need, when they need it, and the pharmacy can better assist them in staying healthy.”

The January effective date also helps insurance companies by giving them time to become compliant with the new state law. Pharmacists can start synchronizing a patient’s medicines now if the patient gives permission to the pharmacist.

There are some adjustments that will be unique to each patient, so it’s best for them to discuss it directly with their pharmacist and see if the pharmacy is starting to participate in med-sync and then see how the program will affect the patient’s prescriptions.

Kelly Ridgway, head of the Arizona Pharmacy Association, called the law “common sense,” saying it will impact patient care in a meaningful way.

“I just went there the other day and all of [his prescriptions] were there,” says Anderson, who is relieved he can now schedule one trip to the pharmacy a month, instead of making multiple trips.