By Teri Carnicelli
On Jan. 5, crews will begin to demolish the former Rancho Solano Private School at 240 W. Missouri Ave. to make way for a new single-family subdivision, 240 Missouri. But the transition from a classical-looking school building constructed in the 1950s to modern urban-looking dwellings has not been without some opposition.

The development project made its way through city channels beginning in early 2013, but almost immediately met with protests from surrounding neighbors, including some from the Central Park West condo development directly to the east as well as the neighborhood to the north. Their primary concern: the density of the project and its effect on parking and traffic. The project, neighbors said, was not what they had hoped to see replace the well-liked school.
School’s out 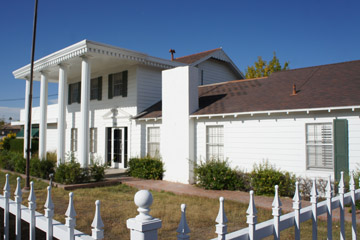 The Rancho Solano private school, opened in 1954 at 240 W. Missouri Ave., will be demolished beginning Jan. 5 to make way for a new, upscale housing development
(photo by Teri Carnicelli).

In late spring 2012, the Missouri campus of Rancho Solano Private Schools, which served preschool to eighth grade students, closed after 58 years of service.

Rancho Solano was founded in 1954 by the Bayer and Freesmeyer families. Tedii Freesmeyer taught in Phoenix’s Alhambra and Washington school districts and opened the private school after becoming disenchanted with the overcrowded public school classes.

The Freesmeyer family sold Rancho Solano to the for-profit Meritas Family of Schools in 2007. Meritas proposed to integrate Rancho Solano with the nine other schools it owns in the United States, Switzerland and Mexico and give all the schools an international focus.

With its new partnership with Meritas, Rancho Salano consolidated its operations to just two campuses (upper school and lower school), both in Scottsdale. To that end, it closed both its Gilbert and Peoria campuses in May 2014.

But in the meantime, the original Missouri campus sat vacant and fenced off, becoming something of an eyesore over time. Neighbors hoped to see it redeveloped—but as something that would fit with the character of the long-established neighborhood. That isn’t what they got, they contend.

Upscale homes
The 240 Missouri community will feature 29 two-story homes, some of which will have rooftop decks. The homes will range from 1,943 to 2,683 square feet, and only a few of them will have any outside property, such as a patio. The project will instead have a centrally located pool, a small dog park, and a community picnic area with barbecues. Each unit will have attached two- or three-car garages. Prices will begin in the mid $450s.

“The quality of the project speaks for itself.”The developers are local residents Terrence Plas and Gary Haydon, both professionals in the real estate development and construction industries.

“We think this project is ideally located from a pedestrian standpoint,” says Keith Mishkin of Cambridge Properties, who will be handling sales in the subdivision. “You can walk to the light rail to get anywhere quickly, and there are a number of restaurants and venues within just a few blocks.

“The quality of the project speaks for itself,” Mishkin says. “It really is in the center of it all.”

The problem, neighbors say, is that both the look and the density of the project don’t fit the neighborhood.

The developers had initially requested variances to have no front yard or side yard setbacks, to allow lots with no street frontage, and to increase the maximum height limit when next to a single-family residential district to 30 feet, where 15 feet was allowed. Needless to say, neighbors were not pleased, and a lawyer was hired to represent their interests.

Common ground
After meeting with neighbors on several occasions and asking for a continuance on the zoning hearing, a compromise of sorts was finally reached. The final development plan indicated that the new homes would have to be set back 20 feet along the north property line, and the setbacks along the west property line would be between 15 and 17 feet.

The development going in at the former site of the Rancho Solano Private School at 240 W. Missouri Ave. features two-story gray buildings with brick accents and amenities like a pool area and some rooftop decks (submitted rendering).

The city had proposed allowing a bike and pedestrian path along 3rd Avenue to continue through the property, which meant leaving open access to the north. Neighbors objected for both safety reasons as well as concerns that, with limited guest parking, visitors would park on their streets and walk through the open access area, increasing traffic and noise in the bargain. Ultimately the city’s zoning administrator sided with the neighbors on that issue and neighbors even have a signed legal agreement with the developer to the effect that there will be no open access to the north of the property.

Despite the concessions, many neighbors are still unhappy with 240 Missouri. They decry the density, which the developers say is necessary on the odd-shaped infill parcel. The homes are essentially like condos but will have separate lots and separate ownership, to allow for easier financing for the project.

They also have a more urban look to them, with concrete walls with brick accent—something more appropriate for a downtown urban environment, not for a well-established, older neighborhood, opponents contend.

Ultimately concessions were made on both sides before the Phoenix City Council gave its final approval in September 2014. Francis J. Slavin was retained to represent adjacent neighbors, and said he felt the neighbors had given a lot and the developer had given more to get “a project that everyone could live with.”

Market values
Mishkin pointed out that there is pent-up demand in the North Central area for newly built housing. “Meritage had much success last year with sales in their condo development at 16th Street and Missouri, although those are condos, and the square footage is significantly smaller than what we have at 240. In addition, there are many larger speculative new homes being constructed in North Central, but at a much higher price point.

“We think that 240 Missouri is hitting a sweet spot that is missing from the market—2,000-3,000 square feet with two and three car garages,” Mishkin says. “It’s a perfect low maintenance, ‘lock and leave’ situation.”

Chris Campbell, an urban real estate specialist with RooPho Realty LLC, believes the development is appropriate for the area. “Central Phoenix is like that—every street is a combination of old and new. There are some units right across the street that were built in the 1980s. It’s a real mix of housing stock,” he points out.

Campbell has sold properties in the area over the years, including in the Central Park West development, first built in 1965 and considered a fine example of Mid-Century Modern architecture. “The neighborhood is so eclectic, I can’t see that [240 Missouri] would impact their home values.”

But at least one real estate professional sees things differently. Heather McDermott with Long Realty happens to live just to the north of the property. In fact, her home backs up to the development’s north property line. And she’s not happy about what’s going in next door.

“Being a Realtor, I’m for development and that school was derelict for a while,” McDermott said. “At the same time it is densely populated for the size of the property. As a Realtor I know there is always a parking issue when you have these dense units.”

She also doesn’t think the design of the homes fit with the look and feel of the area. “We love the idea of something new, but it really doesn’t fit in with the North Central corridor design and charm of this neighborhood, which has established ranch homes, older condos, and nicely treed properties with grass. You hope for the best; but what we are going to be looking at is a big gray wall.”

McDermott fears that her home will be devalued next to such a large, overshadowing development, and that she will have to plant some large trees in her back yard to ensure greater privacy from those units that will overlook her home.

“A lot of people in the central corridor really need to understand what the city has planned for this area. We want to see development and growth, but you have to be responsible because it can eventually have a negative impact. You have to be careful that you don’t ruin the charm of a neighborhood with developments that are more appropriate for urban/downtown environments.”