By Teri Carnicelli
Two youth residential homes operated by the nonprofit Boys Hope Girls Hope of Arizona (BHGH) were completely revamped over a five-week period this summer, thanks to local builders Robson Communities and Camelot Homes, along with their partners and subcontractors. 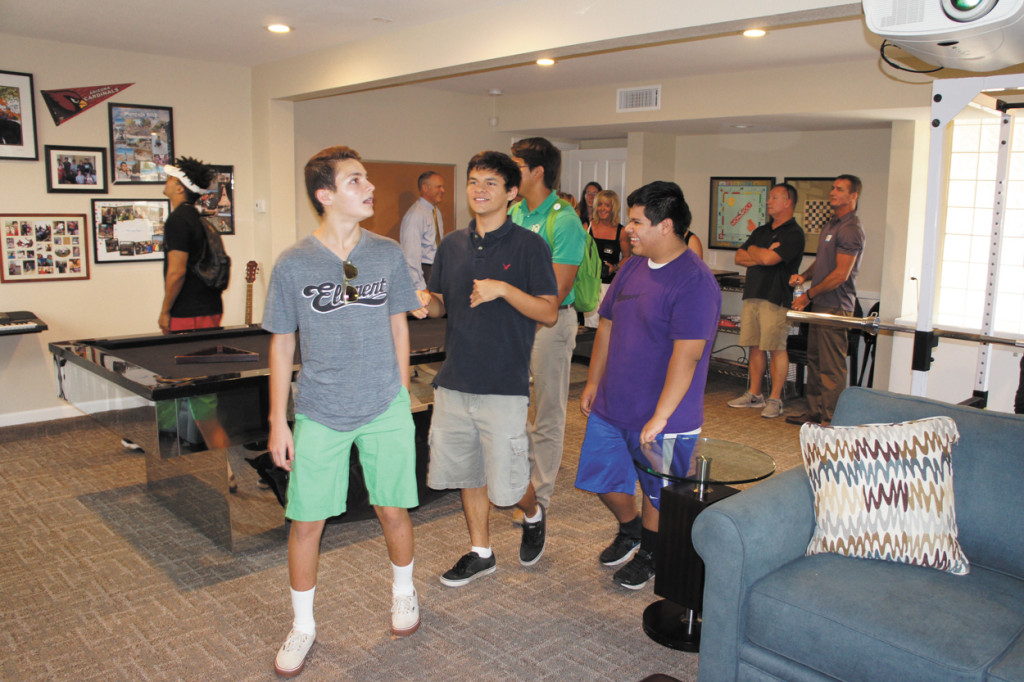 Seeing their fully remodeled home for the first time after being away for a month are the very happy residents of the Boys Hope home, operated by Boys Hope Girls Hope of Arizona. Alyisse, far left, checks out the sports memorabilia inside the new rec room while Julio, Diego, Roberto and Josue are all smiles as they see the new projector TV screen, video game console, sectional couch, exercise/weightlifting area, musical instruments, and more (photo by Teri Carnicelli).

The work on the two Boys Hope and Girls Hope homes began on June 20 and wrapped up on July 31. The young residents of the homes traditionally spend the month of July with relatives so the timing was perfect to give each residential home a thorough refresh. The boys came back on Aug. 6 and were stunned by the results, as were the girls when they returned on Aug. 7.

Robson Resort Communities signed on to revitalize the Boys Hope home, while Camelot Homes focused its efforts in revitalizing the Girls Hope home. A sort of friendly competition ensued; when one builder heard about something the other was doing on their work site, then that same upgrade had to be added to their own project site.

Essentially, each home looked brand-new and show ready by the time the contractors were finished. Susie McArdle, residential counselor for the Boys Hope home, said, “It far exceeded any of our expectations. It’s been amazing.”

John Eldean, senior real estate relationship manager for Alliance Bank of Arizona, also serves on the board of BHGH as part of the bank’s program of community outreach. He says that when the idea of refurbishing the two aging homes came up, he immediately knew what to do. “My contacts through the bank are home builders, so it was a no-brainer to approach them,” he explained. 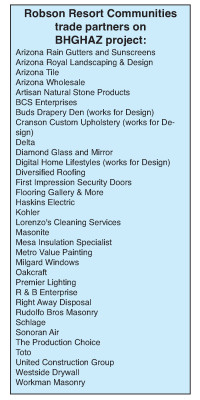 Eldean contacted Ed Robson, founder of Robson Communities, who then “ran with it,” contacting all of Robson’s trade partners. Camelot similarly came on board with a great deal of excitement and enthusiasm. Eldean estimates the total value of the remodel at the Boys Hope home to be in the neighborhood of $250,000-$300,000.

“This would not have been possible without our trade partners, who really stepped up and took time out of their busy schedules to get this done,” said Chris Harrison, senior vice president of Construction Operations, Robson Communities. “In a short period of time, they did an incredible job.”

Amy Caffarello, executive director of BHGH, said, “Thanks doesn’t even begin to say it. Thanks for the new homes, thanks for the new future. Countless, endless good things are going to happen in these homes for years to come.”

The non-residential Community-Based Program began in 2004 to increase the number of children served. BHGH of Arizona currently serves 90 youth: 16 in residence, 42 in the community-based program, and 32 in college. For more information, visit www.bhghaz.org.