By Patty Talahongva
About three years ago, the Deligiannis family moved into the North Central Phoenix neighborhood. By that time they had already racked up a few decades in the restaurant business and earlier this year they decided to open a new place, George’s Kitchen (6102 N. 16th St., Suite 1). The eatery is named for the only son in the family—but not for the reasons you may think. His mother, Ellen Deligiannis, simply says, “Probably because he has the Greek-est name, not because he’s the only boy.” 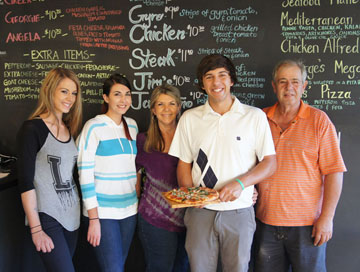 Though their new restaurant may be named after youngest child, George, every member of the Deligiannis family can be found working at George’s Kitchen including, from left: Stacey, Angela, Ellen, George and Jim (photo by Teri Carnicelli).

The patriarch of the family, Jim Deligiannis, is from Patria, Greece. Jim is the original owner of the Crazy Jim’s restaurants but today he is focused on his new restaurant and the Greek-inspired menu.

Driving around the area over time, he noticed the space for rent. With the help of his wife, son and their two daughters, they fixed up the place and decorated it with simple kitchen art. They wanted an open kitchen layout, and the dining room is one big open space. You place your order at the counter and they bring the food to your table. You can see the kitchen staff preparing your gyro, salad or pizza.

“It’s been pretty good, lots of neighbors and lots of families,” says Ellen. She notes that the local residents favor the locally owned restaurants.

“The pita bread is baked fresh daily,” says Angela, one daughter. Jim’s father was a baker, “so I think that’s where he gets his love of baking,” adds Ellen. But he’s not only involved in just the making of the magnificent pita bread and pizza crusts.

Ellen’s other daughter, Stacey, explains, “My dad hand-picks the produce every morning.”

Though he’s nearing retirement age, food is still a passion for him, Jim admits.

Jim’s Greek roots are apparent in the menu items. Appetizers include the Greek flaming cheese dish of Saganaki, and the spinach-stuffed phyllo dough triangles. Other menu items include gyros, pizzas, salads and platters featuring Greek gyro meat, seafood and pasta. Lunch and dinner specials are served all day.

Dessert is a must. The Baklava Sundae is made from scratch and includes vanilla bean ice cream, whipped cream, and honey cinnamon syrup served atop a warmed chunk of baklava. There’s more than enough for two to share.

Wide screen TVs are typically turned to a sports event (with the volume off), and music ranges from reggae to rock. Beer and wine are available and there are happy hour specials. A bike rack will be added soon to accommodate the locals who would rather not drive.

“We want people to come in and feel comfortable,” says Ellen. With tables that have generous space around them, you won’t be bumping into someone’s chair as you come and go.

George’s Kitchen also offers catering for groups of any size and for all occasions. You also can get regular lunch and dinner delivered to your home or office. The delivery boundaries are 7th Avenue to 24th Street and Camelback Road to Northern Avenue. There is a $2 delivery charge.

Right now lunchtime is the busiest time and George, who is often found at the register taking orders, already is seeing familiar faces return each week. You’ll likely be served by one of the family members because they all take turns covering shifts.

It’s a family business, says Ellen, and it has been ever since she married Jim 30 years ago.

George, the eatery’s namesake, says he sometimes helps make the pita salads but not the pizza or pasta. And he highly recommends the tzatziki sauce (a traditional Greek cucumber and yogurt sauce). He also likes the hummus plate appetizer. “You really don’t want to kiss someone after you’ve had it,” he advises. It’s packed with garlic, he warns with a wide smile.

George’s Kitchen opens daily at 11 a.m. and closes Sunday, Monday and Tuesday at 9 p.m., and Wednesday thru Saturday at 11 p.m. See the full menu at www.georgeskitchenphx.com. For more information, call 602-441-3030.