Central High School Senior Angel Moreno has faced tough times in his young life. Raised in a single-parent home with six siblings, Angel’s family struggled with homelessness, not making bills and struggling to put food on the table. Throughout this time, Angel’s mom worked night shifts in order to be with her kids during the day and still provide for them.

As the oldest child, Angel has become his mother’s right-hand man and a father figure to his siblings. He cooks, cleans and spends time with his younger brothers and sisters helping them with homework and ensuring that his mom can go safely to work. This sense of responsibility has carried over into all aspects of his life. 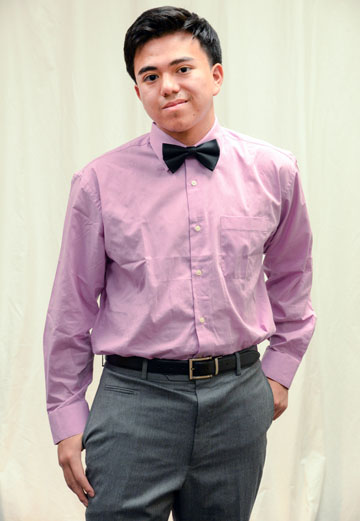 Central High School senior Angel Moreno was named the 2015 Youth of the Year for the Harry & Sandy Rosenzweig Branch of the Boys and Girls Club of Metro Phoenix (submitted photo).

At the Boys & Girls Clubs, Angel never ceases to give back. And for his courage, dedication and generous spirit, Angel was named the “2015 Youth of the Year” for the Harry & Sandy Rosenzweig Branch of the Boys and Girls Club of Metro Phoenix.

As a Keystone member at the Harry & Sandy Rosenzweig Branch, 2242 W. Missouri Ave., Angel helps with homework during Power Hour, reads to younger kids, participates in park clean ups and organized an event to clean the local firefighters’ parking lot and truck. He even shares his love of sports with the younger members at the club by coaching them in soccer and basketball.

“These small things bring a little bit of happiness to the world and it doesn’t really take a lot of my time or energy,” Angel says.

Kindness has even inspired his career path–Angel wants to become a firefighter based on the time he has spent volunteering at the fire station through his Keystone Club. It is something he would have never thought possible without his experiences at the Boys & Girls Club.

Angel and 11 other winners from the organization’s neighborhood clubs were recognized last month at the “Today’s Kids, Tomorrow’s STARS” gala at the Arizona Biltmore Resort. As part of the evening’s program, Angel and his fellow candidates took to the mic and shared their life stories, their obstacles and how the club’s programs and staff members inspired them to face and overcome those challenges.

“I may have not been the person I am now without The Boys & Girls Club,” Angel says. “I could not have asked for a better second home. The friends I have made and the lessons I have learned; this is why I love the club.”

Angel is determined to be the first person in his family to graduate from high school. School has not come easy for him, but he wants to set an example for the rest of his family and be a legacy in his family. He plans to attend Glendale Community College to pursue a degree in fire science.

Each candidate for “Youth of the Year” underwent a 16-week leadership and public speaking training program. Each honoree was treated to a special day of shopping for their gown or tux. The young men and women also receives a scholarship with the Maddie Levitt Scholarship Fund (donated by Ellie Zielgler, former Fiesta Bowl chairwoman).