Two charities teamed up last month to bring much-needed funds to the Sunnyslope Youth Center, through something that most people need but often take for granted: shoes. 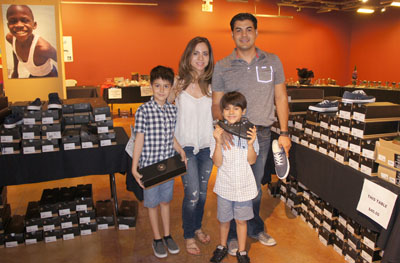 Taking advantage of the great footwear prices at the Global Family Philanthropy Pop-Up Shop last month at the Scottsdale Waterfront are the Castro family from Casa Grande, clockwise from left: Ricky, 9; Myriam; Ricardo; and Danny, 7. All proceeds benefited the Sunnyslope Youth Center (photo by Teri Carnicelli).

Lori Goldberg of Paradise Valley founded Global Family Philanthropy in 2009 to provide basic needs for poor families and children in Haiti and the United States. In September she partnered with Shawn Esmaili, founder of Youth Against Poverty, a registered nonprofit dedicated to providing goods, services, and funds to help children and orphans in both the United States and around the world. And the result was a whole lot of shoes for sale at deeply discounted prices.

Esmaili donated more than 900 pairs of new-in-box shoes for men, women and children. And these weren’t just any shoes; they were familiar names like Asics, Puma, Converse, Adidas, Saucony and Vans.

Goldberg then approached the management of the Scottsdale Waterfront shopping center, who were more than happy to donate a vacant space that fronted Camelback Road to the charity. After setting up tables, putting in small seating areas, and installing large posters of some of the families around the world who have been served by Global Family Philanthropy, the “Pop-Up Charity Shop” was open for business. There were shoes galore, along with hand-made jewelry and craft items from some of the countries that have been aided by GFP.

Shoppers came from all over the Valley, including Case Grande, where one family stopped in after picking up a wedding dress next door at David’s Bridal. Initially the pop-up shop was only supposed to be there for the first two weekends in September, but the Scottsdale Waterfront management allowed the charity to stay through to the last weekend. “It cost quite a bit to build out this space, so the extension was very much appreciated as it allowed us to sell even more shoes,” said Mary Lynn Korn, executive director of GFP.

For more information, visit www.globalfamilyphilanthropy.com or find Youth Against Poverty on Facebook.