With the last few Pearl Harbor survivors now well into their 90s, the remaining first-hand accounts of that infamous attack on American soil are about to vanish. 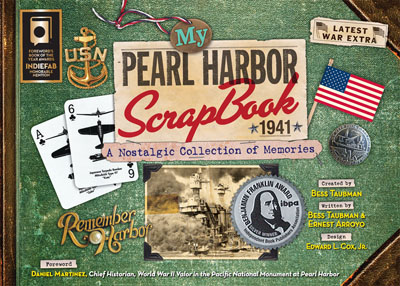 North Central author Bess Taubman has created a unique way to keep their stories alive for future generations. She has penned a book called, “My Pearl Harbor Scrapbook 1941: a Nostalgic Collection of Memories.”

“The attack on Pearl Harbor is not about to be forgotten,” says Taubman of her World War II scrapbook, which has already won numerous awards. “But the individual stories and the heroes are in danger of being lost. It was important for me to pass the baton onto the next generation.”

Taubman was inspired to write the book when she was living Honolulu, Hawaii and the much-anticipated 50th anniversary commemoration of the Pearl Harbor attack was imminent. She visited the Arizona Memorial Visitor Center, but could only find dry, scholarly books about the attack. “Many were complicated, intimidating and monochromatic books on the subject. This started my wheels going,” she recalls.

She is returning to Hawaii this month, having been invited to sign copies of her book at the World War II Valor in the Pacific National Monument at Pearl Harbor on Dec. 7, as part of the 74th Anniversary of Pearl Harbor Day Commemorations.

Taubman’s pages include photos, maps, newspaper clippings, telegrams, pins, hand-typed notes and more. It is jam-packed with treasured memorabilia from that infamous day.

The book recently won the Gold Mom’s Choice Award and the 2015 Silver Benjamin Franklin IBPA Award, one of the highest national honors for independent publishers. Working closely with local graphic designer Edward L. Cox Jr., she has created an important book for all future generations.

Taubman’s products can be found on Amazon.com, bookstores and museums throughout the country and are carried by all major wholesalers. Visit www.mypearlharborscrapbook.com.