“This new project is the tenth art project completed in Sunnyslope over the years, and we are so proud of the work we have done here,” said Donna Reiner, chair of the Phoenix Arts & Culture Commission. 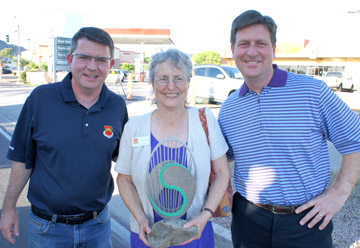 Stanton added, “Sunnyslope is one of the most important neighborhoods in the heart of the city, and everyone here pours their heart and soul into this community.”

The project consists of two sculptures by artist Gordon Huether, who was unable to attend the dedication event. Made of stainless steel and dichroic glass, which refracts sunlight into rainbow colors, the landmarks stand at the east and west ends of the three-block improvement on Hatcher Road, from Central Avenue to 3rd Street. In addition to the two sculptures, the streetscape improvements include sidewalk and landscape enhancements to improve the pedestrian environment.

Huether drew inspiration for the works from the shape of prickly pear cactus paddles and the iconic “S” displayed on the side of North Mountain in Sunnyslope. He combined these elements to create the two 6-foot sculptures mounted on large slabs of native stone. Each sculpture is made of two layers of half-inch waterjet-cut stainless steel.

Small dichroic glass circles are randomly placed throughout the surfaces to capture and refract light into colors that change as you move past the works. The stone used for the sculpture was quarried not far from the Hatcher Road site in North Central Phoenix.

The project was commissioned by the Phoenix Office of Arts and Culture Public Art Program, with percent-for-the-art funds from the Phoenix Street and Neighborhood Services capital improvement programs.