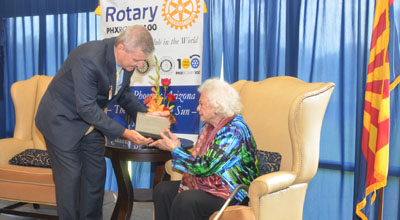 Rotary District 5490 Gov. Paul Pulicken was on hand to help present the award to Justice O’Connor, who has been an honorary member of the club since 2000 and occasionally attends meetings to catch up with friends. Her husband, John O’Connor, was president of the club from 1977-78. He passed away in 2009.