Home / Community / Pet of the Month: A cat tale of spirit, survival

Pet of the Month: A cat tale of spirit, survival 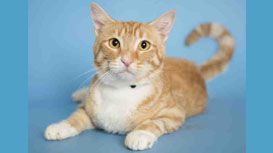 This courageous tabby survived being hit by a car and having a leg amputated, but that’s hardly slowed him down or dampened his spirit. He’s ready for his forever home (submitted photo).

Colonel’s story is one of a stray who ventured too far into the street and was hit by a passing car. The accident left him with a badly broken leg. Emergency Animal Medical Technicians found him lying in the road and rushed him to the trauma center at the Arizona Humane Society.

After a complicated surgery to amputate his injured leg, Colonel is proof that even three-legged cats can be agile. When this orange tabby isn’t exploring high shelves, he likes to shimmy up to the top level of the cat condo and he does so without a hitch. He also enjoys downtime spent watching sitcoms on the couch with his favorite people.