The PCDS Upper School’s Speech and Debate Team had a successful tournament season, with strong showings at all tournament levels.

At the Arizona Interscholastic Association Division II State Tournament, PCDS students not only competed but also played host to students from 17 other schools with enrollments ranging from 250 to 1,800. At the end of the tournament, PCDS won the overall team championship by 11 points. Especially impressive was the fact that the PCDS Upper School has an enrollment of 250 while the second-place team was from a school of 1,740 students. 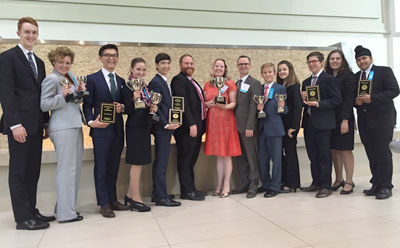 One week later, students attended the National Speech and Debate Association’s National Qualifier. The tournament took place at Thunderbird High School and featured students from schools of all sizes from across the state. The top three in each individual event attended NSDA Nationals June 13-20 in Dallas. Juniors Jillian Gilburne, Jason Greenfield, and Oliver Marsden, and sophomore Parker Whitfill attended the tournament from PCDS. Greenfield and Gilburne returned to Nationals for the second year in a row, competing in Duo Interpretation and were joined by Marsden in Humorous Interpretation.

Greenfield was in the top 15 in the country in Impromptu Speaking, while Whitfill made the top 16 in World Debate.
The PCDS Middle School Speech & Debate Team also had a strong showing this year. During a debate tournament at Gilbert Classical Academy the weekend of April 17, the middle school team won the team championship, as well as numerous individual awards.

PCDS competed against students from more than 10 other local public, private, and charter middle schools, some of which are more than double the size of the PCDS student body.

The middle school team featured five of the six participants in the Declamation Final Round, and had finalists in 10 of the 13 events. The team won championships in four of the five events offered.