Overhaul of tennis center is complete

Owned and operated by the city of Phoenix, crews completed a massive overhaul of the facility first opened in 1969, which was once one of the premier tennis tournament facilities in the Southwest. The renovation project included installation of 25 new state-of-the-art post tension courts, new lighting, shade canopies, fencing and landscaping as well as bleacher seating and new chilled drinking fountains. 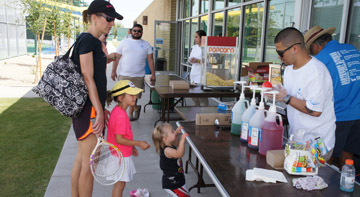 Work began in October 2013 and wrapped up in January 2015. It was done in phases, so that some courts were available during construction. Valley Rain Construction oversaw the project.

The $4.5 million to complete the renovation came from the Phoenix Parks and Preserve Initiative Program (3PI), which provides a one-tenth of 1 percent sales tax that helps fund projects through the Parks and Recreation Department.

In 2008, 83 percent of Phoenix voters renewed the 3PI for 30 more years. Funding is used to improve and renovate existing parks, and to expand and improve the city’s desert preserve system. Sixty percent of initiative proceeds are dedicated to improvements and renovation of city parks and acquisition of land for future city parks.

“We made big things happen at the Phoenix Tennis Center by quickly bringing together residents, staff and the tennis community to map out a vision, identify funding and complete construction,” said Vice Mayor Daniel Valenzuela. “This project puts the Phoenix Tennis Center back on the map as one of the best complexes in the Southwest, and it’s a great addition to a beautiful community park.”

Valenzuela participated in a 10-point match against 9-year-old tennis phenom Thomas Faurel, who is a member of the USA Global Tennis Academy and practices at the Phoenix Tennis Center. The vice mayor accepted his 10-0 defeat good-naturedly amidst the cheers of spectators.

The center, which is just south of Washington Park, offers court reservations, a tennis shop and the services of a certified tennis professional. Visit www.phoenixtenniscenter.net or call for more details 602-249-3712.