Murals donated to variety of families

By Teri Carnicelli
More than 50 murals created by local artists recently were given to refugee families finding new homes in Metro Phoenix, through a partnership between the Phoenix Center for the Arts and The Welcome to America Project. 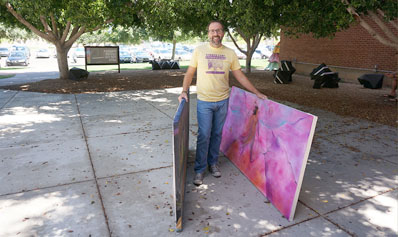 Each December, Phoenix Center for the Arts presents Phoenix Festival of the Arts, a three-day celebration of arts and culture throughout the Valley. One of the main tenants of this event, now entering its fourth year, is the Phoenix Mural Project, which invites local artists and community members to create mural art throughout the festival grounds. These 8-foot by 4-foot murals are sold during the event to raise money for these artists, with a portion of the proceeds benefitting the nonprofit arts center.

Hundreds of unsold murals had previously been languishing in a storage room at the center, where officials still hoped the art could have a “local” impact. When Phoenix Center for the Arts Director Joseph Benesh reached out to WTAP, the organization was thrilled to have the opportunity to place these pieces in the homes of newly arrived refugees. “This partnership gives life to these amazing pieces from the talented, local artists,” says Benesh. “What better way to welcome someone to the Valley, or to their new home, than with a piece of original, local art?”

WTAP serves foreign refugees who have recently been relocated to the Phoenix area by the U.S. State Department. Volunteers will install the art through WTAP’s weekly deliveries program, which provides furniture and household decorations to newly arrived refugees.

“The murals have an integral role in making the apartments feel like a home,” says WTAP Executive Director Collin Cunningham. “It means a lot that the local art community is doing their part to make the Valley a welcoming place for these individuals fleeing war and persecution.”

WTAP was not the only program to benefit from the mural donation project. Phoenix Center for the Arts also recently entered into a partnership with Arizona Housing Inc., an organization that provides permanent, supportive, affordable housing to formerly homeless and low-income individuals. A donation of 20 murals, beginning in June, will ultimately be installed in the common areas at a downtown Phoenix housing community, providing much-needed color and a welcoming living environment to the 297 residents.

“When artists and arts organizations engage with issues like homelessness we have a chance to make lasting change in someone’s life,” Benesh pointed out. “It’s my hope that the people who receive these murals will know that we care about them. Hopefully they can see themselves in the art and feel that this is their community, too.”

For more information about Phoenix Center for the Arts, visit phoenixcenterforthearts.org or call 602-254-3100.