North Central teen Matthew Kaplan, a senior at Tesseract School, in May was presented with an engraved silver medallion in Washington, D.C., to recognize his selection by The Prudential Spirit of Community Awards as one of Arizona’s 2015 top two youth volunteers. 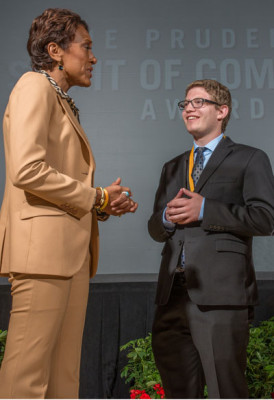 Kaplan created a four-hour interactive educational program to help discourage bullying among middle level students in Arizona and beyond.

Recognizing that middle level students are particularly susceptible to peer pressure, Kaplan began thinking of a way to capture and reverse that pressure, “so that students challenge each other to support rather than discourage each other,” he explained. He developed a series of non-competitive group games, small-team challenges and guided discussions designed to foster empathy and mutual respect, and assembled them into a four-hour program called “Be ONE (Open to New Experiences).”

Kaplan has introduced the program to schools in Arizona, California, Virginia and Indiana; taken it to youth groups and libraries; and promoted it widely through speaking engagements and a TV public service announcement. Through his program, more than 3,500 students so far have been shown “they can wield their power to build each other up, rather than tear each other down,” he said.

As part of his selection as one of only two state honorees, Kaplan received $1,000 and an all-expense-paid trip with a parent in early May to the nation’s capitol for several days of national recognition events.

In addition to his recent award, Kaplan is one of 20 students statewide chosen to receive a scholarship from the Flinn Foundation. If he accepts this scholarship, he will receive an unparalleled package for undergraduate study.

The Flinn program, in partnership with Arizona’s three state universities, provides enriched educational offerings that expand scholars’ life and career options and create the kind of stimulating, intellectually challenging environment that students might find at the nation’s most selective colleges.

Kaplan also was selected as a finalist for the Robertson Scholarship, a full ride to either Duke or University of North Carolina.