He came from a family of barbers; both mom and dad knew how to cut with the best of them, and older brother Frank, who helped Barcelona sweep up in the family’s basement barbershop, also is savvy with the shears. 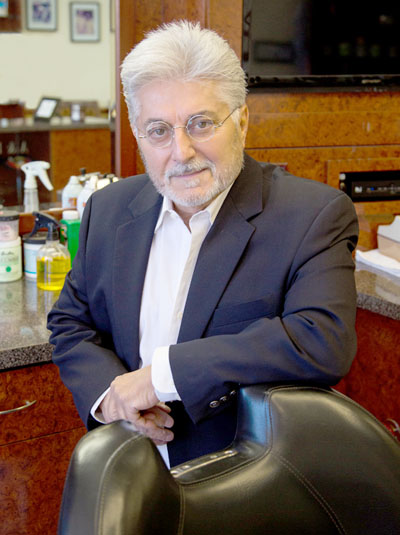 Sam Barcelona is this year’s president of the National Association of Barber Boards of America (NABBA), which is holding its annual conference in Phoenix this month (submitted photo).

But Barcelona decided to take a different route, first serving five years with the U.S. Navy Band, then graduating from the University of North Carolina School for the Performing Arts in Winston Salem, N.C. After he received his degree, he traveled around the country doing stage and commercial work, but didn’t find it as satisfying as he had hoped.

Barcelona still had a little money left in his VA educational account and was told he could either go to a welding school or barber school. “Barber school seemed like an easier fit seeing as how I pretty much grew up in a haircutting environment,” Barcelona pointed out.

After Barcelona finished his barber training almost 40 years ago, he worked in a few shops learning his craft, again by watching the pros—“how they cut, how they related to people with good customer service and also how they ran a business,” he explains. “I felt that these are the real tools of the trade—any trade.” He eventually opened his own business and also continued his pursuit of knowledge, receiving a master’s degree in education.

“I am a proponent of quality education and standards and thought that I could make a difference if I were working as a government regulator with the State Board of Barbers, to continue raising the bar in barbering. When a part-time position became available I interviewed and got the position as a regulatory investigator.”

That was 10 years ago, and not only is Barcelona now the assistant director of that board, one year ago this month he was inducted as the 2015 president of The National Association of Barber Boards of America (NABBA).

The NABBA works with State Barber Boards in serving more than 350,000 barbers and shops throughout the country. There also is a large continuing education component, provided through a national conference—which, as luck would have it, is in Phoenix this month at the Embassy Suites-Biltmore Sept. 20-24.

Right in President Barcelona’s back yard.

It’s also the first time that Phoenix has been the host city for a national NABBA conference since the organization’s inception in 1926. So Barcelona is feeling the pressure to put on a great event.

“This will be a wonderful opportunity for these state delegates who come from all around the country to experience what our great state has to offer,” Barcelona said.

Barcelona also hopes the public will continue to support the traditional small-business local barber. “Over the years I have been asked why, with so many other grooming options today, should the public support barbershops. A barber’s specific training focuses not only on the specialized traditional hot lather shave, but also on the visual imagery and the creative ability to achieve a particular look with cutting shears over comb and clipper work to achieve that custom desired look,” Barcelona says.

“Even today, there is no greater spoiled feeling than a professional hot lather straight-razor shave, the smell of bay rum in the air and the conversation that can still only be found in a true traditional barbershop. Barbering is still one of the oldest professions in existence today and is also as American as Apple Pie.”

For more information on the National Association of Barber Boards September conference in Phoenix, go to www.nationalbarberboards.com.