By Allison Walker
In a little over one year’s time, Arizona Legal Women and Youth Services (ALWAYS) has served approximately 50 clients, consulted with countless others, and given numerous presentations—and all for free. 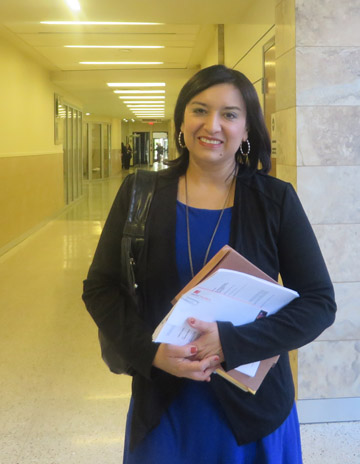 North Central resident January Contreras, a lawyer by profession, created a nonprofit organization in October 2013 in order to provide free legal service to men and women age 24 and younger who can’t afford a lawyer to assist with issues like immigration, employment, family law, domestic abuse, and more. Now instead of prosecuting criminals, she walks the halls of justice to aid the underserved (submitted photo).

Since October 2013, ALWAYS has offered free legal advice and representation to men and women living on their own, up to 24 years of age. Many of the organization’s clients have been impacted by homelessness, sex trafficking or abuse, but ALWAYS handles everything from family law, to immigration, to employment.

“Our clients are some of the most vulnerable people in the state, but also the most impressive. Some of them just have never had the opportunity to show what they’re capable of,” said January Contreras, founder of ALWAYS and a longtime North Central resident.

As a prosecutor, Contreras worked with victims of many different crimes, but it wasn’t until she began working with the White House Council on Women and Girls that she felt inspired to use her legal background to help victims of domestic violence.

Always involved in her community, Contreras explained that working with the Council on Women and Girls, and later with Arizona State University’s Family Justice Center, she felt a new responsibility to use her skills to help people in need.

“So many times I was in rooms where I saw people very desperate for legal services,” she described.

When the doors of ALWAYS first opened, the nonprofit had one client and one working attorney in addition to Contreras herself. They spent an “inordinate amount of time getting the phone and Internet to work,” and had “sticker shock” over how much ordinary office supplies can cost a small nonprofit, remembered Contreras.

The nonprofit recently was included in the Arizona Partnership to End Domestic Trafficking, receiving one of just three grants awarded to cities nationwide each year by the U.S. Department of Health and Human Services.

“The success of our first year has shown us that the need was there and the community was ready to unite around these services being available,” Contreras said.

Attorneys and law students interested in volunteering with ALWAYS can help the organization in a variety of different ways, including providing representation; preparing documents; and working on short term projects such as clinics. Volunteers must complete an application, schedule an introductory meeting and complete an orientation session to become part of the nonprofit’s pro bono workforce.

Volunteers interested in working with victims of sex trafficking also must complete a 12-hour training program.

Community members without legal experience also may have opportunities to volunteer with ALWAYS. While Contreras admits that the organization’s non-attorney needs are limited, at different times of the year the organization will tap volunteers to coordinate events and help with fundraising.

“Building and deploying a force of pro bono attorneys is one of our top goals for this year,” said Contreras. She also hopes to increase the organization’s professional partnerships, as well as relationships with schools and youth development programs.

“We want to think creatively,” said Contreras about an instructional video series that the organization plans to produce in the next few years. “[We want] to take what we learn and share it with policy makers for system reform.”

To learn more about ALWAYS, visit the organization’s website at www.ProjectALWAYS.org or e-mail january@projectalways.org.

Editor’s note: Allison Walker is a journalism student at the ASU Walter Cronkite School of Journalism and Mass Communication.