Cruz honored for eliminating his job 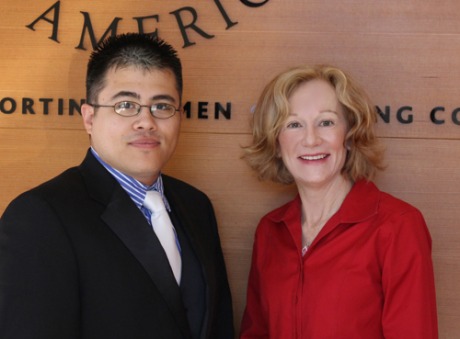 Royal Neighbors of America CEO Cynthia Tidwell congratulates North Central resident and IT technician Edmundo Cruz for being named the company’s Employee of the Year for 2014 (submitted photo).

North Central Phoenix resident Edmundo Cruz has been presented the 2014 Employee of the Year Award by Royal Neighbors of America for working himself out of a job on the night shift.

How did he change the dynamics of his job? He used existing tools and systems to create an automated attendant to perform his after-hours job functions. Because the life insurance organization values innovation and initiative, it rewarded Cruz’s out-of-the-box work by creating a new job for him on the day shift.

Cruz joined the Royal Neighbors staff in 2012 and serves as an application support developer in the Information Technology (IT) department. Through a series of proven techniques and self-made technologies, he created an application that initiated functions and processes that essentially eliminated the need for his position with Royal Neighbors. This resource savings has allowed Royal Neighbors to utilize his significant skills in other areas of IT, thereby building an even more robust team in the technology arena.

“A strong addition to our team, Edmundo is a creative thinker and has clearly demonstrated his commitment to excellence at Royal Neighbors,” said CEO Cynthia Tidwell. “His resourcefulness is just another reminder of how important it is to tap into the innovative ideas that come from employees in all parts of the organization.”