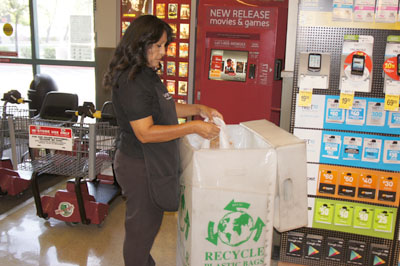 Maria Galaviz, who has worked at the Safeway at 7th Street and Glendale Avenue for eight years, says the store’s bag recycling bin is emptied three times a day on average (photo by Teri Carnicelli).

The Arizona state legislature and governor may have put the kibosh on local municipalities outlawing plastic grocery bags, but the city of Phoenix continues to push for more ways to eliminate them from our lives—and landfills.

Councilman Bill Gates, chair of the Phoenix City Council’s Finance, Efficiency, Economy, and Sustainability Subcommittee, is touting a proposal to expand the city’s voluntary Bag Central Station program to reduce the number of plastic bags being sent to the landfill.

The program is a partnership with the Arizona Food Marketing Alliance (AFMA) retail members and other Phoenix retailers. Under the voluntary program, participating stores and establishments place plastic bag recycling receptacles in stores to give residents a viable place to recycle plastic bags, which are not permitted in city recycling bins as part of Phoenix’s curbside recycling program.

Since the program kicked off in 2007, a recent waste characterization study and survey showed that the use of plastic bags in Phoenix has decreased from 86 percent to 62 percent, and the use of reusable bags has increased from 7 percent to 28 percent.

The study also showed that there are approximately 4,667 tons of plastic grocery/merchandise bags still being disposed of annually by Phoenix residents. Under a proposal presented to the city council’s Transportation & Infrastructure Subcommittee, staff aims to reduce that amount by 20 percent by 2020.

“Bag Central Station is a great example of how voluntary compliance programs can produce real results,” said Gates, who also serves on the Transportation & Infrastructure Subcommittee, which approved expanding the program. “We’ve shown that Phoenix’s approach of cooperative partnerships and proactive outreach and education works and should be expanded.”

Current retailers who participate in the Bag Central Station program include Safeway, Walmart, Albertson’s, Bashas’ (including AJ’s Fine Foods), Fry’s, Ranch Markets, and Spouts. Bags that are accepted in the program include grocery bags, dry cleaning bags, bread bags, department store bags, and shrink wrap. All bags must be clean and dry.

The expanded Bag Central Station program would increase city’s partnerships with retailers as well as increase the outreach and education efforts with grocers, retailers, other industries that use plastic bags and Phoenix residents.

Since spring 2014, staff has expanded focus beyond grocery stores to partner with other retailers (Arizona Retailers Association), the Phoenix Chamber of Commerce, Keep Phoenix Beautiful and the Arizona Restaurant Association. These partners have expressed support for outreach and campaign efforts to reduce plastic bags found in trash and recycling containers and increase collection sites to include retail and convenience stores.

For more information, visit http://www.afmaaz.org and click on the Bag Central Station logo.