By Teri Carnicelli
New bikes racks are popping up in front of businesses in the trendy Melrose District, thanks to a partnership between the city of Phoenix and the Community Alliance of Seventh Avenue (CASA). 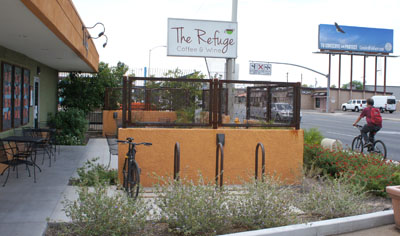 With the increasing popularity of bicyclists traveling along the Melrose Mile, the Community Alliance of Seventh Avenue (CASA) is offering businesses in that stretch along 7th Avenue between Indian School and Camelback roads free bike racks at their locations, such as this four-loop rack installed a The Refuge café just south of Camelback Road (photo by Teri Carnicelli).

The racks are sturdy metal loops that cost about $25 per loop, and are installed by city of Phoenix Street Transportation workers. The racks are funded by CASA, which is comprised of a six-member board; two members are from the Seventh Avenue Merchants Association (SAMA), and the other four each represent the four neighborhoods adjacent to the Melrose area—Grandview, Pierson Place, Carnation and Woodlea-Melrose.

CASA’s mission is to focus on things that benefit the diverse population that lives, works, shops and dines in the Melrose District. CASA members also are working to promote the “Melrose mile,” which stretches from Camelback to Indian School roads along 7th Avenue. Other projects in the pipeline include turning a vacant lot into a gather place, and painting the road at the north end of the Melrose mile with the “M7” logo.

And with the planned improvements to the Grand Canal, CASA members believe more people will be using the improved bike path to travel to the Melrose area to take advantage of all it has to offer.

The city of Phoenix last year received approval for $4.9 million in funding to construct a multi-use trail along the Grand Canal, including the north bank between 7th and Central avenues in the Pierson Place Historic District. The project, when completed next year, will include a 10-foot-wide multiuse path, dusk-to-dawn pedestrian lighting, neighborhood links to local streets, and signalized trail crossings at 7th and Central avenues. There also will be areas for public art.

The Pierson Place Neighborhood Trail is the first phase of the larger Grand Canalscape Project, which will eventually result in a contiguous trail along the Grand Canal between Central Phoenix and Tempe.

“We definitely anticipate more canal usage by bicyclists in the future,” said Charley Jones, president of CASA. “More people will be riding their bikes to shops and restaurants along the Melrose mile, and we want to encourage businesses in the area to take advantage of these free bike racks we are offering.”

The city will send someone out to determine where the rack can be placed, based on public rights-of-way and easements, and advise about how many loops would best fit the space. If you own business in the Melrose District and would like more information on a free bike rack, e-mail charcor@cox.net or ppawlowski9@cox.net.

Other business, nonprofit and service organizations interested in purchasing bike racks from the city for their areas can contact Joseph Perez, City of Phoenix bicycle coordinator, at 602-534-9529 or joseph.perez@phoenix.gov.