‘Rising stars’ perform at The Nash 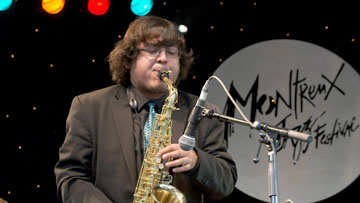 Alto saxophonist Alan Acosta was member of the Tucson Jazz Institute from seventh to 12th grade. He performed with the TJI’s top ensemble, the Ellington Big Band, which took first place in the Essentially Ellington High School Jazz Band Competition and Festival in both 2013 and 2014. He will be appearing at The Nash on July 9 as part of the “Catch A Rising Star” series (submitted photo).

The Nash, 110 E. Roosevelt St., announces its “Catch A Rising Star” Summer Concert Series featuring performances by young Arizona jazz artists. The musicians range from high school to recent college graduates between ages of 18-24, who either are based or were raised in Arizona.

Curated by The Nash, this series provides a platform for these emerging artists to gain prominence in the jazz community. All “Catch a Rising Star” musicians are offered a clinic by an experienced local jazz educator in advance of their performance at The Nash. This concert series melds the educational mission of The Nash and its non-profit parent organization, Jazz in AZ to develop jazz musicians for the future along with providing an entertaining concert series for the summer. All concerts are 7:30-10 p.m. Fridays.
The schedule includes:

• Trombonist Nathan Bitter, July 24. Bitter, 17, is a rising senior at Highland High School in Gilbert. He is a member of the concert band, jazz band, symphony, and marching band. Bitter has been in the top All-State Jazz Band twice, and has also been a member of the All-State Band and All-State Orchestra. In addition to trombone, he also plays piano and is the drum major for the Highland High School marching band.

• Vocalist Ira Hill, July 31. Hill’s influences include everyone from Jon Hendricks to Frank Sinatra, Mark Murphy to Mel Torme. He has performed in jazz venues around the country. Being from the Valley, his mentors include Grammy-nominated pianist and vocalist Judy Roberts and Grammy nominated Count Basie vocalist Dennis Rowland. His first studio album, produced by Cheryl Bentyne of The Manhattan Transfer, is set for release in the future.

• Alto saxophonist Alex Young, Aug. 13. Young is a recent graduate of Arizona State University with a Bachelor of Music degree in Jazz Studies. Young has performed at The Nash, the Lost Leaf, Winfields, Club Congress, and the Vig. He has performed with the Arizona Jazz Masterworks Orchestra under the direction of Fred Forney.

Tickets are $15 for general admission and $8 for students. More information is available at www.thenash.org.