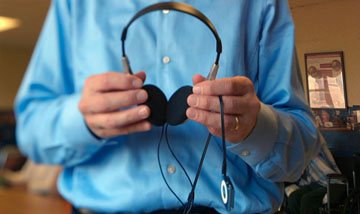 A new documentary, “Alive Inside,” shows how music can trigger memories and even speech in some people who suffer from advanced stages of dementia (photo courtesy of Bond360).

Hospice of the Valley invites the public to a free showing of an award-winning documentary about the transformative impact of music on people with dementia, 3:30 p.m. Wednesday, Nov. 12 at Beatitudes Campus, 1610 W. Glendale Ave.

“Alive Inside” is heartwarming, inspiration and sometimes astonishing in its depiction of seemingly nonresponsive patients revitalized by familiar songs from their youth. Their joy stands in marked contrast to the institutionalization, isolation and pharmaceutical management of people with dementia. The film won the Audience Award for Best Documentary at the 2014 Sundance Film Festival.

Hospice of the Valley and Beatitudes are using the Music and Memory program on which the film is based. Personal music players are programmed by staff with music customized to each patient. When the familiar songs play, patients become animated, humming or singing along, tapping their feet or even breaking into a dance.

“The music triggers memories and even speech in some who were unable to talk or respond five minutes before,” said Maribeth Gallagher, director of Hospice of the Valley’s dementia program. “It offers a sense of familiarity, comfort, and well-being.”

Gallagher will lead a question-and-answer session following the screening of the 78-minute film in the Everett Luther Life Center. Reservations are requested; call 602-776-6793 or e-mail events6@hov.org.