Using a pillowcase to help emergencies

Armed with pillowcases, Red Cross staffers teach third-fifth graders how to prepare for an emergency.

Their visit to Orangewood Elementary School last month, and other schools throughout the year, are part of the Pillowcase Project to teach students and their families how to prepare for disasters. The Red Cross Grand Canyon Chapter is one of several chapters nationally piloting the program launched this year. AmeriCorps members assigned to the Red Cross are presenting the programs in Arizona. 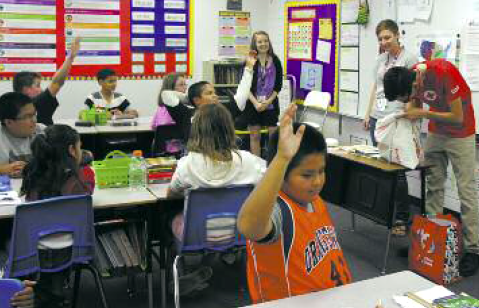 Fifth-grade students at Orangewood Elementary School try to guess some of the items found inside an “emergency pillowcase” during a presentation by AmeriCorps members assigned to the Red Cross Grand Canyon Chapter. Searching the bag for items guessed by students is Eduardo Camacho, while fellow presenters Jannika Pinter (center) and Rochelle Dashney (left) look on (photo by Teri Carnicelli).

Speaking to Orangewood fifth-grade teacher Katy Donaldson’s class on Oct. 17 were AmeriCorps/Red Cross members Jannika Pinter and Eduardo Camacho, with assistance from Rochelle Dashney, an intern with the Red Cross’ Disaster Preparedness Program. Pinter and Camacho talked about the different kinds of disasters—including the major flooding recently in the Phoenix area—as well as forest fires and earthquakes. They emphasized that the most common “disaster” experienced by families all over the country are house fires—and that’s why having a working smoke detector in the house is so important.

As for the “pillowcase” kits, they recommend putting in things like a flashlight, small radio, extra batteries, a first-aid kit, water pouches and non-perishable food items. At the end of the presentation, each student received his or her own specially made “pillowcase” to take home and make into a go-bag for easy transport during an actual emergency. However, the presenters cautioned that during a home fire, the most important thing is to get out safely and quickly, so if there isn’t time to get your emergency pillowcase, leave it and go.

The project is a partnership between the American Red Cross and the Walt Disney Company to create a standardized preparedness education program for elementary schools nationwide.

“We hope to reach families and encourage them to work together to make plans and build kits,’’ Foy said. “We encourage use of the pillowcase for evacuation emergencies for which there is time to plan.”

The curriculum is tailored to a third-grade level so children can understand the significance of what disasters can do to their communities.

For more information about the Pillowcase Project, contact the Grand Canyon Chapter at 602-336-6693 or go to http://tinyurl.com/pjackeo.