Bell-Zinn donates much of her own time and resources to keep the art program supplied and interesting for her students. She has collected and re-purposed city campaign posters to create a replica sculpture of the school’s mascot, created a topiary, and works with the local business community to receive donated supplies.

In appreciation of her efforts, Bell-Zinn received $5,000 worth of equipment and supplies for her classroom.

Lopez tapped for Navy summer seminar
The U.S. Naval Academy (USNA) invited a select group of approximately 2,550 young men and women from around the nation and abroad to attend the Naval Academy Summer Seminar program this year. Among them is James Lopez, a student at Washington High School.

Summer Seminar is a fast-paced leadership experience for rising seniors in high school. This program helps educate, motivate and prepare selected students who are considering applying for admission to USNA. Lopez will attend a six-day session and experience a glimpse of USNA life.

Students will have the opportunity to live in Bancroft Hall, eat in King Hall along with participating in academic and leadership workshops. They also will participate in daily physical training involving group runs and conditioning exercises.

Students will also participate in seamanship and navigation classes and will take a cruise aboard a Navy Yard Patrol (YP) Craft to apply what they will learn in class.

For more information about the Naval Academy, visit: http://www.usna.edu or the USNA Admissions Facebook page.

Donation aids two school libraries
Members of Girl Scouts Troop No. 2028 had a bittersweet ending to the school year. The girls from “Troop Meadow Lark” made $1,000 in this year’s cookie sales, but the decision was made to disband in part because many of the girls who started out at Madison Heights, where the troop was based, had moved on to the fifth grade at Madison No. 1 in the 2013-14 school year.

Still, the girls were left with the fruits of their labor and no real idea what to do with the cookie sale proceeds. After some discussion, is was decided to donate half the money to their former elementary school, Madison Heights, and the other half to their new middle school, Madison No. 1. The money would be used specifically to buy new books for both school libraries.

“These wonderful fifth grade girls wanted to do something special with the money they had leftover when their troop was no longer going to continue due to various circumstances,” explained Katie Hrabczuk, library associate for Madison No. 1. “They decided that, since they all shared a common love of reading, they would like to donate their money equally between both their elementary and their middle school libraries.”

Along with the donation came a list of suggested titles for the libraries to purchase, including a couple of new book series that the girls themselves were eager to read. Hrabczuk and her fellow library associate at Madison Heights, Angela Robson, were happy to comply, and there was more than enough money to buy additional titles for other grade levels as well. In all, a total of about 75 books were purchased using the $1,000 donation.

“We could not be prouder of these girls,” Hrabczuk said.

Student earns prize for bright invention
On May 2, local youth Richard King won first place in the Madison No. 1 Invention Convention for his creative design of the H2Glow. The H2Glow is a glow-in-the-dark water bottle/nightlight, which helps thirsty kids to feel safe and find their way at night.

King is a student in Lisa Vaaler’s sixth-grade science class. The purpose of the Invention Convention was to showcase the students’ inventive talents and to motivate, encourage and inspire the desire for experimentation and discovery.

Clarendon garden triples in size
The S.O.A.A.R. (Student Opportunity for Academic Achievement and Respect) program garden plot, originally born from the efforts of a Boy Scouts of America troop over 10 years ago, is tripling in size.

This project, located at Clarendon School, is being done by students one shovel at a time. Unlike traditional school gardens where adults do most of the labor and students just water and plant seeds, S.O.A.A.R. students are given full ownership, allowing them to take part in every process they are capable of doing. The learning experience for the students has been so significant that each one of them can share how every part of the garden was created.

They take great pride in showing how they participated in measuring the garden plot, drafting a design, cutting rebar, leveling planting beds or collecting animal manure for the compost bins. Every student in the program has played a unique and specific part in the birth of the garden.

Progress of the garden is a daily event and continues to unfold. Community participation includes seeds being donated by the Valley Permaculture Alliance’s Seed Bank, and all compost for planting beds being donated by Singh Farms. Free manure also came from Two Acres School of Riding.

The site will continue to expand with an urban fruit orchard, rainwater catchment system and micro-livestock installed and maintained by the students. Students would be happy to give visitors a tour. For more information or to find out how you can support the S.O.A.A.R. program garden project, visit soaargardens.tumblr.com.

In the category of Foreign Language, Nan Qiu from North High was the overall winner with “Trivial About the Youth.”

Students head to national contest
Twenty-three PUHSD students medaled in events at the Arizona Skills USA Championships, April 15-16, and eight of them qualified for the National Championships in Kansas City, Mo., June 23-28.

Six Camelback High engineering students medaled in two events and two of the students—Alissa Rodriguez and Francisco Ochoa—won a gold medal in Mechatronics. They qualified for the national contest this month. In Humanoid Robotics, Camelback students Kayla Mendez and Adrian Munoz won silver medals, and the team of Dalton Duel and Christian Hernandez won bronze in the same category.

Other medalists were Jose Romero Arias, with silver, and Jesus Orta with a bronze in Collision Repair Technology, and Byron Sanchez, a silver in Job Interview. In addition, the team of Karina Vargas, Jose Tanori, ArlyMelendrez, Jorge Barrera, Liliana Gutierrez, Orlando Garcia and Diana Martinez won a silver in Opening and Closing Ceremony.

Franklin school receives accolades
Franklin Police & Fire senior boys and girls teams won the 11th annual Fire Muster competition, April 5 at Glendale Community College. It was the second consecutive title for the girls, while the boys won the event for the first time.

The teams are coached by Fire Science Instructor Richard Verduzco and Gabe Medrano. The Thunderbirds fielded seven teams, including three all-female teams, the most girls teams ever fielded by a school in this competition. Franklin defeated teams from Peoria, Glendale, Moon Valley, Sunnyslope and Apollo High Schools.

Franklin also recently was named a “Beat the Odds” Silver School, by the initiative of the Center for the Future of Arizona that measures school improvement for schools that are at least 50 percent low income and minority, primarily Latino. Franklin has been an “A” school since the state implemented A-F letter grades.

The rest of the scores have come in, and North was well represented in both state and national rankings. Eleven other North students finished in the top 10 in the nation in the exam.

In Level 3, Guillermo Arenas and Maya Christian tied for fourth in state, sixth in the nation. Lina Quintero Segura and ArrenKimbel-Sannit tied for fifth in state and eighth in the nation, and Isabel Diggins was seventh in Arizona and 10th in the United States.

First year French student Hugo Crick-Furman was second in state and ninth in the nation. In the Level 4 (fourth year), Stacy Espinoza placed second in the state.

Salcido a Teacher of the Year finalist
Royal Palm Middle School PE teacher Jodi Salcido is one of five finalists for the KSLX Radio Teacher of the Year Award. Representatives from KSLX and Landings Credit Union surprised Salcido with the award during class on April 30.

KSLX invited listeners to tell them about a teacher who stands out in the classroom and makes a difference in their child’s world. One honored teacher is selected each month from January through May. Salcido was the March finalist. As part of her recognition, she received a new iPad.

GLAAZ grads off to colleges 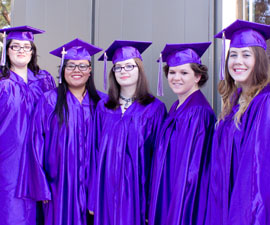 The Girls Leadership Academy of Arizona (www.GLAAZ.org) recently held commencement exercises for its second-ever graduating class. Each of the five graduates plans to attend college, develop additional skills and create ongoing opportunities for their academic and personal futures. Several of the students are the first in their family to graduate and are now setting an example for younger classmates and siblings.

“My younger sister also goes to GLAAZ and looks to me,” Adileny Garcia, 2014 GLAAZ graduate, said. “We come from a single mom that is always working, she raised us herself … my hard work in high school and now going to college won’t just pay off for me, I feel like it helps to pay back my mom, too.”

Families interested in becoming part GLAAZ can call 602-288-4518 or visit www.glaaz.org. Tours for prospective students and their parents are available.

This project challenges the seventh- and eighth-grade students to research issues that affect their community. Through this project, students “Pay It Forward” by becoming personally engaged in a response to social justice.

Students begin their project by earning $10, which is then matched by the school through grants. These start-up funds are used by the students in their fundraising efforts.

The seventh grade hosts the Arrupe Marketplace where they sell small homemade items to the school community. The eighth grade has creative student-organized fundraisers that raise funds for their organization. Fundraisers this year involved taco nights, hockey clinics, lacrosse clinics, ice cream socials, babysitting services and many other creative ideas.

As the Arrupe Projects conclude, students used their funds to purchase items needed by the organization, then they personally deliver those items.

More than 140 students raised $34,759. From the money raised they purchased and delivered items to 42 different organizations. Since the Arrupe Project’s inception, more than $94,000 has been raised and money distributed to 211 Valley organizations.

The students will use the funds to further develop Xavier’s second-annual Girls Have “IT” Camp, a summer camp designed to inspire middle-school girls in computing and technology through hands-on activities and mentoring.

This year’s Girls Have “IT” Camp will feature two sessions: June 2-5 from 1:30-3:30 p.m. and June 9-12 from 1:30-3:30 p.m. AspireIT is a middle school outreach program that matches National Center for Women and Information Technology (NCWIT) Award for Aspirations in Computing recipients with participating Academic Alliance or K-12 Alliance members to create and run computing-related outreach programs for middle school girls—such as after-school programs, summer camps, clubs and weekend conferences.

Inspired by the desire of young women in computing to “pay it forward,” AspireIT aims to employ a “near-peer” approach that provides middle-school girls with a positive, sustained experience of learning and creating computing alongside their peers in high school and college.

The Honor Choir took the top score in “women’s chorus” at the WorldStrides Heritage Festival of Gold in Washington, D.C., on Monday, April 7. Directed by alumna Brittanie Fain, the Xavier Honor Choir was then invited to perform a special encore at the festival concert.

PCDS honors its alumni, founder
Phoenix Country Day School celebrated a Bridge-the-Gap weekend on April 11-12. The kick-off began on Friday night at Chelsea’s Kitchen with an alumni happy hour and continued on Saturday evening with an Alumni-Athletic Hall of Fame celebration, and finished with PCDS’ biggest party of the year—the annual Bridge-the-Gap.

Bridge-The-Gap brings together the entire PCDS community—family, faculty and alumni—to promote the school’s annual fund. A special guest to this year’s event was the school’s founder, May Sue Talley, who was honored as Distinguished Honorary Alumna.

Katie Hassett (’14) had an offensive rebound and basket with less than 2 seconds left in the game to win the championship 28-27 over St. Mary Basha. The team is coached by John Burns.