Linnartz completed seven AP classes in his high school career and carried a 4.7 weighted GPA. He also served as captain of the JV soccer team, captain of the football team, and was on the varsity cross-country team. He was a member of the National Honor Society.

In April, Linnartz was honored by Arizona Speaker of the House Andy Tobin, and Representatives Lela Alston, Kate Brophy McGee, and Eric Meyer for being sought by West Point, the United States Air Force Academy, and the United States Naval Academy.

Linnartz accepted an appointment to the United States Naval Academy and began school at Annapolis last month. Linnartz’s older sister, Kirsten, who graduated from Sunnyslope High School a year before him, also was accepted into the Naval Academy. Parents Troy and Pandora Linnartz are both teachers at Sunnyslope High.

WHS earns an A+ rating award
The Arizona Educational Foundation (AEF) announced in April that 34 Arizona public schools earned the coveted A+ School of Excellence award for the 2013-2014 academic year. Among them was Washington High School.

Since 1983, AEF has honored exemplary pre-kindergarten through 12th grade public schools in Arizona with this program, which gives recognition to outstanding public schools and strives to create a comprehensive framework of successful programs and practices that other schools throughout the state and nation might adopt.

To become an IB World School offering an IB program, Simis was evaluated by an external review team to verify that IB practices and program requirements are in place.

The IB organization works with schools, governments and international organizations to develop challenging programs of international education and rigorous assessment. These programs encourage students across the world to become active, compassionate and lifelong learners who understand that other people, with their differences, can also be right.

Only schools authorized by the IB organization can offer any of its three academic programs: the Primary Years Programme (PYP), the Middle Years Programme (MYP), or the Diploma Programme (and in addition the IB Career-related Certificate).

Madison Meadows is entering the final year of IB World School, Middle Years Programme (MYP) candidacy, and will host an external review team visit in the spring of 2015.

Metro Tech honored with A+ rating
Metro Tech High School has earned the A+ School of Excellence Award given by the Arizona Educational Foundation. The school celebrated the award on May 15 with school and district staff, students and representatives from the AEF. Only 34 schools statewide, including nine high schools, were selected.

To qualify as an A+ School, schools must demonstrate sustained high achievement or significant improvement through assessment data. Winning schools are recognized for their superior ability to identify and meet the academic and non-academic needs of their student population.

Principal Kate McDonald and staff had to complete an arduous 22-page narrative application, and a selection panel of education leaders conducted a two-day site visit, visiting every classroom and interviewing students, parents, teachers, support staff and the administrative team.

Metro Tech also has been named a 2014 Bronze School in the U.S. News and World Report’s Best High Schools list. In the 2012-13 school year, it was recognized as a Beat the Odds “Gold School” by the Center for the Future of Arizona, and was a 2012-13 Arizona Higher Performing School, according to the National Center for Educational Achievement annual report.

Metro Tech has met or exceeded the state average on AIMS scores in math, reading and writing each of the last three years.

Central High opens on-campus preschool
Central High School will open its Central Cubs Preschool this month. The preschool is part of the Early Childhood Education CTE (Career and Technical Education) program, and is staffed by a pre-school director and two assistants. In addition, 11th and 12th grade high school students also participate in the preschool as part of their Early Childhood Education requirements.

Full-time is $460 a month, due by the fifth of every month. The preschool will coincide with Central High School’s schedule, therefore parents will be discounted for any days the high school/center will be closed.

There is a $150 non-refundable registration fee, due upon enrollment, $100 of which will go toward the first month’s payment. Snacks and meals will be provided by the Central cafeteria. For more information, contact Toni Dang, director of Central Cubs Preschool, at dang@phoenixunion.org or 602-764-7591.

North High lauded for SAT scores
North High School made a list of the Top 50 High Schools in Arizona, based on an average SAT score. The statewide ranking is based on 2013 SAT test scores from The College Board, which administers the test nationwide.

North had a 1602 average score, and ranked 41st. Every school on the list had at least 10 students take the test. Phoenix Union Bioscience High School also made the list with a 1581 average.

Most Phoenix Union schools concentrate on the ACT exam, which is given free to every 11th grader. Students choose to take the SAT on their own.

Industry leaders representing more than 600 businesses, corporations, trade associations and unions recognized competitors from around the country for their demonstrated excellence in 99 hands-on occupational and leadership contests, such as robotics, criminal justice, aviation maintenance and public speaking. All contests are designed, run and judged by industry using industry standards.

Top student winners received gold, silver and bronze medallions. Many also received prizes such as tools of their trade and/or scholarships to further their careers and education. The SkillsUSA Championships is for high school and college-level students who are members of SkillsUSA.

The resource center is open weekdays from 9 a.m. to 5 p.m. Parents and caretakers are encouraged to call or come by for information on parenting skills training, family-centered support, kindergarten preparation, preventive programs and more. 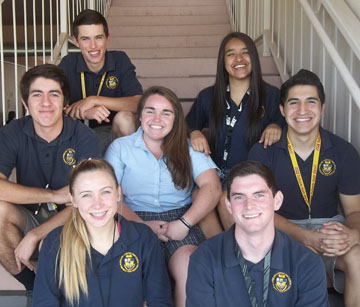 For its exemplary record of leadership, service and activities that serve to improve the school and community, Bourgade Catholic High School has been awarded a 2014 National Gold Council of Excellence Award by the National Association of Student Councils (NASC). Bourgade is the only high school in the state of Arizona and one of only seven Catholic high schools in the country to be honored.

“Receiving a NASC National Gold Council of Excellence Award reflects the highest dedication on the part of the local school to provide a strong, well-rounded student council program,” says Ann Postlewaite, Director of National Association of Secondary School Principals (NASSP) Student Programs. “NASC applauds the work of the National Gold Councils of Excellence and challenges them to continue their leadership and service to their schools and communities.”

Bourgade Principal Kathryn Rother said, “Bourgade is extremely proud of our student leaders who continuously model unwavering dedication to the call to learn, lead, and serve. These young people represent well the students of our school as they serve their school, their community, and their God. We congratulate them for this recognition of all their hard work.”

The eleven young women received this honor for placing in the top one-half of one percent of the 1.5 million students nationwide who took the PSAT; earning SAT scores that confirmed their earlier performances on the PSAT; boasting outstanding academic records throughout high school; and participating actively in community and school activities.

In addition to these eleven finalists, 14 Xavier students were named Commended Students for placing among the top 5 percent of students who entered the 2014 competition.

Xavier principal given accolades
Xavier College Preparatory principal Sister Joan Fitzgerald, BVM, was honored by the Arizona Interscholastic Association (AIA) at the AIA Champions Awards Luncheon on May 19 at the University of Phoenix Stadium in Glendale. Fitzgerald, Xavier’s principal since 1974, was named the organization’s “Pursuing Victory With Honor” Administrator of the Year.

In the fall, Fitzgerald traveled to Washington, D.C., to accept the U.S. Department of Education’s prestigious 2013 National Blue Ribbon School award on Xavier’s behalf. Recently, she was named “Most Influential in Valley Education” by Arizona Foothills Magazine.

Chambers bids farewell to Brophy College Prep
John Chambers attended Brophy College Prep’s 2014 graduation for the last time this June, leaving with many accomplishments. Among them is his recognition as the only coach in Arizona who has taken both boys’ and girls’ basketball teams to the Arizona state finals.

Chambers was born in Florence, Ariz., graduated in the first graduating class as a Prospector from Apache Junction High School and went on to produce a legion of accomplished athletes and students in his professional career as a teacher and coach.

In the 45 years at Brophy (with a one year interruption from 1987-88 at The College of William and Mary), Chambers taught world history, biology, AP biology, anatomy, kinesiology and PE. He served as Brophy’s head basketball coach for 10 years and assistant varsity football coach, topping his career off as Brophy athletic director for 24 years.

Father Edward Reese S.J., president of Brophy, said, “John has spent more than half his life at Brophy, developing young men on and off the court as a role model, a gentle yet demanding teacher and coach. He will be greatly missed by all.”

Gilberg an intern at TGen this summer
North Central teen Grace Gilberg was selected for a prestigious internship with the Ivy Neurological Science Internship Program at the Translational Genomics Research Institute (TGen).

Gilberg, a junior at Phoenix Country Day School, was one of nearly 800 applicants for the position designed to “inspire a new generation of scientists with the skills needed to pursue the complexities of studying the human brain,” according to a TGen spokesperson.

The 10-week, paid internship will have Gilberg collaborating with college undergraduates, as well as graduate medical school students, in her research. She has been placed with two researchers, Nhan Tran, Ph.D., and research associate, SerdarTuncali, in the division of Cancer and Cell Biology. During her research program, Gilberg will study the brain, with particular emphasis on genetically based malignant brain tumors.

The test consisted of 50 multiple-choice questions and one open-ended question. This year, seven students from All Saints’ Episcopal Day School placed in the top 10 students in the state.

“The success of our students is encouraging since our aim is to facilitate learning in all academic disciplines, including STEM-related courses,” said Head of School Leo P. Dressel. “Their achievements are a credit to the foundation provided through the collaborative work of our teachers.”

The Catechesis program will be overseen by Melinda “Mindy” Longwell and Claudia Margarita Schmitt, who have a combined experience totaling more than 50 years in this teaching methodology.

The Catechesis of the Good Shepherd is a Montessori method of spiritual formation in which the catechist and the child together explore the mystery of God. By creating a sacred environment for their spiritual needs, the child can grow in a loving relationship with God and the church.