With California experiencing one of its worst droughts on record, grocery shoppers across the country can expect to see a short supply of certain fruits and vegetables in stores and to pay higher prices for those items. 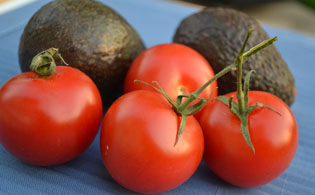 Arizona shoppers could see prices for avocados rise as much as 17 to 35 cents each, and tomatoes jump 22 to 45 cents per pound, thanks to the ongoing drought in California. Grocery stores might choose to start bringing in replacement produce from out of the country, like Chile or Mexico, so read those labels carefully
(submitted photo).

Professor Timothy Richards of the W. P. Carey School of Business at Arizona State University recently completed some research on which crops will likely be most affected and what the price boosts might be.

“You’re probably going to see the biggest produce price increases on avocados, berries, broccoli, grapes, lettuce, melons, peppers, tomatoes and packaged salads,” says Richards, the Morrison chair at the Morrison School of Agribusiness within the W. P. Carey School of Business. “We can expect to see the biggest percentage jumps in prices for avocados and lettuce—28 percent and 34 percent, respectively. People are the least price-sensitive when it comes to those items, and they’re more willing to pay what it takes to get them.”

Industry estimates range from a half-million to 1 million acres of agricultural land likely to be affected by the current California drought. Richards believes between 10 and 20 percent of the supply of certain crops could be lost, and California is the biggest national supplier of several of those crops. For avocados, the state is the only major domestic source.

The fruit and vegetable crops most likely to be affected by the drought are the crops that use the most water and simply won’t be grown, or those sensitive to reductions in irrigation.

Richards adds, “Because prices are going to go up so much, retailers will start looking elsewhere for produce. This means we’ll see a lot more imports from places like Chile and Mexico, which may be an issue for certain grocery customers who want domestic fruit and vegetables.”