John C. Lincoln North Mountain Hospital is the first in Arizona, and only one of eight hospitals in the United States, to reduce or eliminate radiation for minimally invasive cardiac procedures using MediGuid technology. 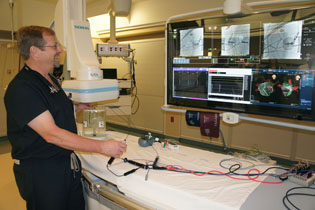 MediGuide is a navigation and imaging system intended for the evaluation of vascular and cardiac anatomy on a recorded three-dimensional image, instead of live fluoroscopy (a series of X-ray images). Procedures using MediGuide include patients with cardiac arrhythmias such as atrial fibrillation (A-Fib), cardiac resynchronization therapy (CRT), and device implantations such as pacemakers and defibrillators.

“Radiation exposure in hospitals has gone up dramatically in the last several years, and there is a measurable increase in cancer risk with the increase in radiation exposure,” explained Mark Siefert, M.D., board certified cardiac eloctrophysiologist, which basically means he is a heart rhythm specialist. Electrophysiology (EP) is a branch of cardiology that deals with the diagnosis and treatment of heart rhythm disorders.

“Our ability to reduce that radiation exposure is not only a major benefit to public health, but also to our staff members who perform these X-rays regularly,” he added.

Traditionally, fluoroscopy is used in EP labs for catheter manipulation during cardiac procedures. On average, a heart procedure in a typical EP lab could require 20 to 30 minutes of continuous fluoroscopy; the radiation exposure is equivalent to 500 chest X-rays.

MediGuide cuts radiation at least by half, if not 100 percent during certain heart procedures. It uses low-powered electromagnetic signals to locate a miniature sensor, which is placed in the tip of the catheter, much like GPS technology drivers use to determine the location of their vehicle on a map. MediGuide provides physicians with the precise position of the sensor-enabled catheters and tools to create recorded three-dimensional images.

Instead of multiple monitors spread around the lab, one giant screen can display any X-rays, results from EKG monitoring, the 3-dimensional model of the heart produced by the MediaGuide, the catheter position, and more. Lights are specialized to reduce their heat output, and much of the equipment in the lab is on booms that can be easily moved around.

The hospital on average performs 300 cardiac catheter lab procedures, which will now be done in the EP lab.