By Teri Carnicelli
A long-vacant large retail space in the shopping center at Central and Dunlap avenues will finally be filled and opened for business come June 11, much to the relief of many residents in the adjacent Village Center neighborhood. 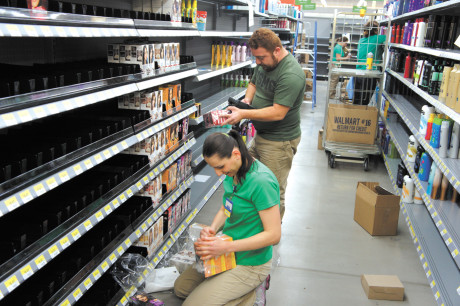 Walmart Neighborhood Market employees, including Hanaa Qiryaquos (left) and Salwin Korkies, stock the shelves in the hair care/beauty section in advance of the store’s grand opening in Sunnyslope, set for June 11 (photo by Teri Carnicelli).

That’s because the store will be filled with a brand-new Walmart Neighborhood Market, returning a local grocery store to a community that serves a mix of socioeconomic and ethnic backgrounds, as well as many who don’t own transportation.

In March 2010, long-time tenant Food City shut its doors, to the shock of many in the community. It was operated by Chandler-based Bashas’, at the time the 15th-largest privately held supermarket chain in the nation, which in July 2009 filed for Chapter 11 reorganization in U.S. Bankruptcy Court in Phoenix.

The space has been vacant until now, and the shopping center itself changed ownership just after the Food City closure. The current owner is Whitestone Reit, which acquired the property just after the company went public in August 2010. Along with the new owners came a new name, from Village Center to Marketplace at Central—and a facelift, with new paint, landscaping and other architectural features.

It’s been a struggle in a down economy to fill the smaller retail spaces, let alone a large anchor tenant. But the Walmart Market plans were announced in September 2013 and there has been a high level of anticipation in the community ever since.

Demolition on the interior and construction of the new store, done by Sletten Companies, began in mid-December and wrapped up in early May.

Scheduled to open at 7:30 a.m. on Wednesday, June 11, the approximately 44,000-square-foot store, located at 115 E. Dunlap Ave., will include a full line of groceries and an assortment of general merchandise, as well as a full pharmacy. The store will be open 24 hours a day, seven days a week, but the pharmacy will maintain regular hours.

According to Walmart store manager T.J. Arthur, the 24-hour schedule was decided on after looking at surrounding businesses and realizing nothing else was open late hours. Given that the store is right across the street from a major employer that also is open 24 hours a day—John C. Lincoln North Mountain Hospital—it made sense to be a 24-hour-a-day store to serve employees and visitors who may be arriving and leaving at off hours, Arthur explains.

As part of Walmart’s mission to provide healthier food options to its customers, the store will feature a good-sized organic produce section, as well as several shelves of gluten-free packaged items, Arthur says.

The store also will have a full-sized liquor department, however, no liquor sales will occur between the hours of 2 and 6 a.m.

Walmart Market will employ approximately 100 people, many of whom live in the Sunnyslope community. Arthur says no more than a dozen store-to-store transfers of employees were accepted, and those were employees from the Chris-town Spectrum Mall store who live closer to the Sunnyslope store. The rest were all new hires.

As part of the opening day, several vendors will be on hand giving out free samples and there will be other free opening day festivities. If you decide to line up early, grab a pastry and a cup of coffee from the nearby Karl’s Bakery to munch on while you wait—Karl’s opens at 5:30 a.m.