By Teri Carnicelli
When Garrison Mais was a toddler, he fell in love with the desert landscape. His greatest joy was walking the long and meandering trails in the Phoenix Mountain Preserves. 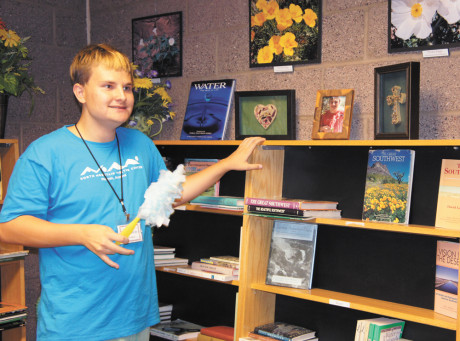 Garrison Mais, 17, dusts the shelves in the library and reading room at the North Mountain Visitor Center, where he’s volunteered for over a year. The top shelf also displays a framed photo of Garrison, with two pieces of his original artwork, also framed, on either side of his picture (photo by Teri Carnicelli).

Garrison was diagnosed with profound infantile autism when he was 18 months old. He faced extraordinary challenges every moment of his early childhood, and still does today, at age 17. But he can still be found with a smile on his face, hiking Arizona’s plentiful desert trails and even picking up trash along the way as an official city of Phoenix park steward, which he became seven years ago.

These days Garrison also can be found on Tuesday afternoons, straightening and cleaning the library and reading room at the North Mountain Visitor Center, 12950 N. 7th St. He’s been a volunteer there since April of last year.

The center was originally constructed and operated by the city of Phoenix Parks and Recreation Department, but due to budget constraints of years past, the center’s operations were turned over to the nonprofit Save Our Mountain Foundation. Volunteers keep the center open seven days a week, from the morning to early afternoon.

Garrison’s job is to straighten the shelves in the library, put books back where they belong, dust the shelves and knick-knacks, and most recently, vacuum the carpet. But his absolute favorite thing to do is roll the trash barrel outside to the big dumpster and dump it in, says Kathy Bogart, who has provided therapy services to Garrison since he was 3.

Garrison’s favorite people at the center are Karen and Ron Beck, who are the volunteer custodians. Karen also is the assistant manager of the gift shop.

“They have been so wonderful to him,” Bogart says, referring to the Becks. “They call it ‘his’ library, and he takes so much pride in keeping it clean. He has progressed a great deal since he began volunteering here.”

Karen Beck agrees. “We’ve seen some big changes in him since he’s been coming here. When he first came, he was very docile and quiet,” she recalls. “I read to him and talked to him, and that made him happy.”

Karen owned a daycare center for more than 10 years and had experience working with children with special needs. “I love children, I can really communicate with them,” she says. “Garrison and I just hit it off.”

Garrison recently was chosen as the “Spotlight Volunteer” at the North Mountain Visitor Center, which also features some of his hand-made art designs.

For many individuals with autism, it is very common to have one or more self-stimulatory behaviors, often called “stims.” One of Garrison’s “stimming” behaviors is rolling or twisting papers, leaves, or wrappers.

“For years, we tried to alleviate this ‘stimming’ behavior, until we noticed the true beauty of this ‘stim’,” Bogart explains. Garrison’s twisted and rolled papers are now mounted onto shapes like crosses and hearts. Some are on display in the library room at the center; others have been sold at the Sunnyslope Art Walk and at local stationery shop Write-Ons, Etc. His art also has been displayed in the 411 Gallery inside ASU’s University Center building in downtown Phoenix, and exhibited in the Autism Zoo Walk, Autism Conferences, and AZA United Autism Conference.

You can purchase his artwork at www.OriginalsbyGarrison.com. If you do buy one of his pieces, e-mail him indicating which one you chose, so that he can e-mail a thank-you note back. Garrison donates a percentage of the earnings from his artwork to the Save Our Mountains Foundation and the North Mountain Visitor Center.