By Teri Carnicelli
Two older shopping centers in North Central Phoenix are working hard to bring in new, fresh tenants—and one is even getting a major facelift. 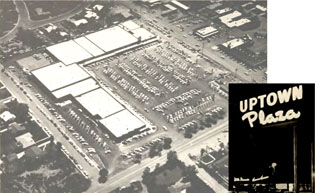 When it first opened in September 1955, the Uptown Plaza, located at the corner of Central Avenue and Camelback Road, was the first suburban shopping center in Phoenix and included then cutting-edge amenities such as 650 complimentary on-site parking spaces and neon-lit, cursive-style signage above each store that stayed lit until 11 p.m. nightly (submitted photo).

The Cinema Park Village Shopping Center, located at the northeast corner of 7th Street and Missouri Avenue, got its name from the former business there—namely, the Cinema Park Drive-In, a place of laid-back nights under the stars watching a movie with the family. It went the way of most Valley drive-ins in the late 1970s to mid-1980s, evolving into apartments, motels, and of course, shopping centers.

Lately the Cinema Park center has been a hub of activity. The large parking lot has been resurfaced, and Donna Reece, who has more than 22 years with ZELL Commercial Real Estate, has been busy leasing up the center.

New tenants include Reformed Pilates, which recently opened, as well as Anthony’s Cigar Emporium, which is set to open before the end of the year in the former City Financial building just north of Starbucks.

Two new tenants which are scheduled to open in 2015 are V’s Barbershop, and a restaurant with a “familiar name” in the Valley, inside the old Chinese buffet space adjacent to Spinato’s. But as to who it will be … “It’s a ways off before opening and they want to wait until closer to announce,” Reece explains.

Also working hard to bring in an attractive mix of new tenants is Uptown Plaza, located at the northeast corner of Central Avenue and Camelback Road. But it’s not just new tenants, it’s a whole new look that the center will shortly be sporting.

Originally developed by the Del E. Webb Co. in a partnership with International Council of Shopping Centers co-founder, Roy Drachman, the Uptown Plaza was an instant Valley landmark when it opened on Sept. 25, 1955, thanks to its contemporary design and unique mix of more than 20 national and local tenants. Uptown Plaza was the first suburban shopping center in Phoenix, and included then cutting-edge amenities such as air-conditioned and glass-fronted retail spaces tucked behind expansive overhangs, and matching neon-lit, cursive-style signage above each store that stayed lit until 11 p.m. nightly.

Today, however, Uptown Plaza is literally a shell of its old self, buried under decades of stucco and other outdated “improvements,” and suffering from chronic vacancy due to its economic and physical obsolescence, says Vintage Partners Principal, David Scholl.

Vintage Partners in Phoenix (www.vintagevp.com) was selected by Uptown Plaza Associates, LLC, to redevelop and re-tenant the iconic shopping center. The architect is Nelsen Partners and the general contractor is Kitchell Contractors Inc.

“The landlord deserves some real credit for recognizing that this center needed an injection of new life in it—new tenancy, and a brightening and shining of the center itself,” Scholl says.

The shopping center, which sits on nearly 12 acres in the city’s midtown core, today is only party occupied and overdue for both a mechanical and an aesthetic overhaul. Starting in September, Uptown Plaza began a wall-to-wall remodel and refresh, which includes restoring the plaza’s brick-lined façade and Mid-Century Modern charm. The existing tenants will remain open during the renovations, Scholl emphasizes.

The renovation plans include trying to preserve as much of the original red brick façade (including many interior walls) as can be saved. “The end results will combine a restoration of the classic lines and low-slung shapes with verdant new landscaping and modern amenities, including rebuilding the original 15-foot shade overhangs with cantilevers to achieve a sleeker, less cluttered look,” Scholl says.

As for AJ’s, they are leaving the interior alone, since parent company Bashas’ likes to do its own interior designing, Scholl explains. “AJs has several more years on their lease, and we’re not about to tell them what the inside of their store should look like.

“We are coordinating the exterior with them,” he adds.

In the near future, Vintage Partners will announce plans for new tenants, including restaurant concepts from top local restaurateurs. “We want to recreate Uptown Plaza’s historic mix of inspired local restaurants and boutiques, thoughtfully paired with national brands, that together serve the needs of the neighborhood and make this shopping center a destination for Central Phoenix residents,” Scholl says.

The remodeled interior spaces will be turned over to newly leased tenants hopefully by early summer, so they can be open by late summer or early fall.