Music students perform at The Nash

By Amy Pantea
The Nash and Phoenix Conservatory of Music (PCM) have partnered to create a student Jazz Ensemble for the 2014-2015 year, giving students a chance to perform in the esteemed downtown jazz venue as well as learn from some of the people who play there. 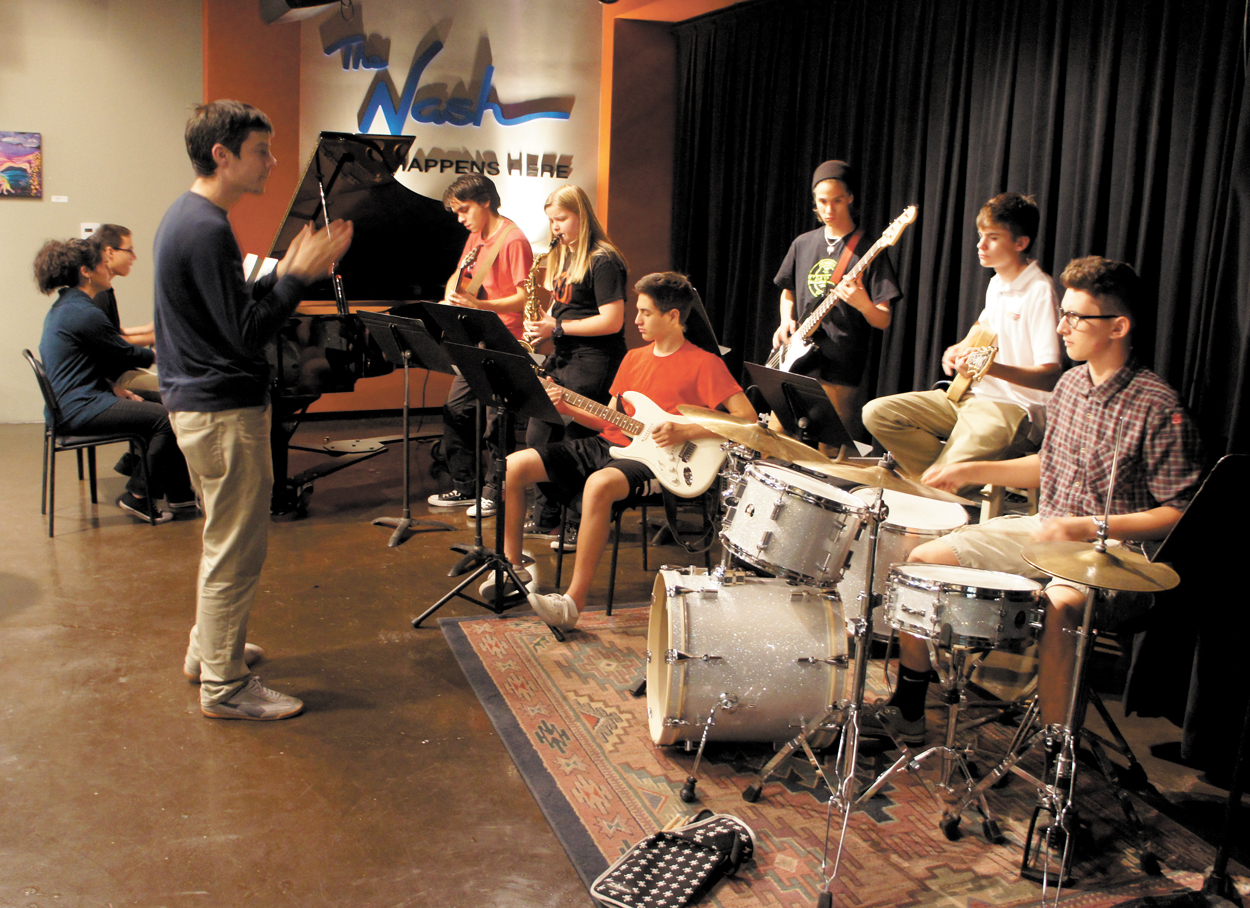 The students, as young as 11, auditioned for the opportunity to learn and rehearse jazz in the newly established Jazz Ensemble, as well as play at The Nash in a true jazz environment.

Regina Nixon, executive director of PCM, said, “It’s one thing to learn to play an instrument in a classroom. It’s quite another to play in an actual venue, where jazz musicians live and breathe. This opportunity for students to learn and play in The Nash will allow them to absorb jazz through their skin, breathe the air of an actual jazz club, and feel the way jazz should be played.”

Fifteen-year-old North Central resident Cian Callahan, drummer of the ensemble, said playing live at The Nash was different than what he is normally used to.

“Your crowd is either really energetic or for some reason it’s a really formal event so they can’t quite be that energetic. You can still tell these people enjoy the music even if they aren’t necessarily shaking their hair having a good time,” Cian said. “It gives you a reason why you’re playing jazz every Tuesday night for two and a half hours.”

The year-long program is being led by instructors Will Goble, with the help of Ross Lewicki. Both perform on a regular basis at The Nash, located at 1st and Roosevelt streets. Goble works at both The Nash and PCM as an instructor, and is also the City Music coordinator at The Nash, helping to create the new student jazz ensemble program.

On Oct. 26, the PCM Jazz Ensemble played three opening songs to start off The Nash’s Sunday night jam session. After the student jazz ensemble opened with their three songs, the stage was opened to jazz performers of all talents to play, and the ensemble members were able to stay and watch the performances.

“Maybe they’ll get to play with some more experienced players and see what it’s like to play with people they’ve never met before, in an informal, but structured setting,” Goble pointed out. “They sort of learn the etiquette and customs and unspoken rules.”

Goble said most of the students in the ensemble are very new to playing, so he gets to help the students discover if playing jazz is something they really love, or at least try something new. “A lot of [students] are discovering if they really like jazz, or want to play another kind of music, which is also cool. The best part of it is they have the chance to have more information at their disposal as they decide what music is going to be for them in their future, immediate and far away.”

Cian has been studying the drums for eight years, and admits that he’d much rather be playing rock or hard rock instead of jazz. It doesn’t stop him from wanting to learn as much as he can, though.

Enrolling in the Phoenix Conservatory of Music, which is located in Metrocenter Mall, was a “turning point in music” for Cian. “No pun intended, but it really has been instrumental in taking [Cian] to a new level in not just playing, but listening to music, appreciating music, understanding all the thought behind music,” Sean Callahan, Cian’s father, said.

The Jazz Ensemble will perform a free concert at Metrocenter Mall at 3 p.m. on Sunday, Dec. 14.

The Phoenix Conservatory of Music, a nonprofit organization that provides quality music education that is affordable and accessible, is affiliated with the Berklee City Music Network. For more information, visit www.PCMrocks.org.

Editor’s note: Amy Pantea is a journalism student at the ASU Walter Cronkite School of Journalism and Mass Communication.