By Patty Talahongva
Summer vacations for families typically means heading to the nearest theme park, beach or campground. Yet, one North Central family is proving that you can head to exotic places like South Africa with your kids.

In fact, they’re inviting you to join them on their family trip. 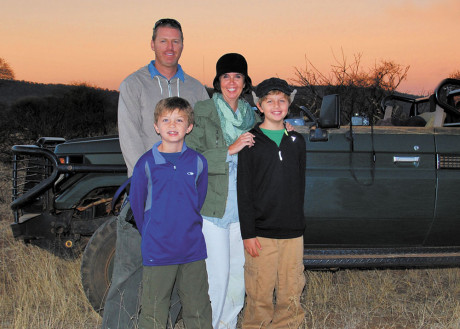 Enjoying a spectacular sunset at the Madikwe Game Reserve in South Africa are the members of the globe-trotting Simmons family, clockwise from top left: dad Jeremy, mom Carrie, and sons Nathan and Seamus
(photo courtesy of Travel With Kids).

For Jeremy and Carrie Simmons, travel has been their life for 10 years. It’s the family business because “Travel with Kids” is an internationally syndicated TV show, airing in 150 cities and 30 countries. Along for the ride are their sons, Nathan and Seamus, who were just 1 and 3 years old when the family first hit the road with camera gear in tow.

“Experiencing the world through the kids’ eyes,” is very rewarding, says their mother. “They notice different things than I would and their sheer excitement is contagious.”

One notable moment came when the family traveled to Machu Picchu. At the time the boys were 5 and 7. “Nathan made it to the end of the path that overlooks the ruins first,” Carrie recalls. “A man coming down the path noticed us and asked if that was our son. I said yes, and he said, ‘The look on his face when he saw Machu Picchu for the first time just made my journey. Thank you for that’.” She says his appreciation and words filled her with emotion.

Imagine their boys’ passport books filled with stamps from trips that have taken them to Mexico, where they buried turtle eggs with scientists, or to Rome, where they learned to fight like a gladiator while visiting the Coliseum. Few other children their age can boast that they have hiked the Great Wall of China. The family has racked up a lot of memories with trips to five continents, exploring their global community.

These adventures have been captured for their TV show. Jeremy, a former television reporter and anchor, does all the videotaping and most of the editing, while Carrie, who has worked in newspaper advertising sales, writes the scripts and markets the show. It airs on KAET’s Life Channel on Wednesdays at 1 and 8 p.m., found on antenna channel 8.2, Cox channel 80, and CenturyLink Prism channel 9. The show is repeated at 2 and 9 p.m. Fridays. You also can watch it on demand via free streaming at https://travelwithkids.pivotshare.com/.

Now the Simmons family wants to share its adventures with other families who are game to travel with their kids. Two trips are planned for this summer to South Africa. The first one is already sold out. But you can still sign up for the trip slated for Aug. 4-13.

“We chose South Africa because our kids were so incredibly impacted by our trip there,” Carries explains. Two years ago they visited a school in the township of Soweto and saw firsthand the lack of basic supplies for the school children. It made such an impression on her younger son, Seamus, that when he returned home he started fundraising to buy supplies and send them to the school. Two years later, he’s still selling lemonade and other items to joggers and classmates to raise money.

Each trip includes some sort of history lesson at the site where the history was made. So in South Africa they will learn about the life work of Nelson Mandela. They will also be involved in some volunteer work and of course they will take in the exotic nature by going on a safari.

For itinerary and pricing, go to www.travelwithkids.tv and select the link for the Family Adventure South Africa Tours. If you don’t have a passport or need to renew an expired one, you still have time; go to http://travel.state.gov. Passports can be processed in four to six weeks or expedited in eight days to three weeks.

A note of caution to the parents: be prepared to really spend time with your kids and not have them glued to any electronics. “That is the other vital component of family travel for me,” Carrie points out. “That uninterrupted family time that you get on the road, engaged with your kids, without work schedules, school work, after school activities, house cleaning, and all the other things that vie for our attention in everyday life. So we limit electronics to protect our family time on the road.”

Parts of this trip will be videotaped for their show and participants can decline to be in the video if they wish. After this inaugural multiple-family trip to South Africa, the Simmons clan plans to invite more families to travel with them to the Mayan Riviera, Costa Rica, Ireland, Israel, Fiji and Peru.