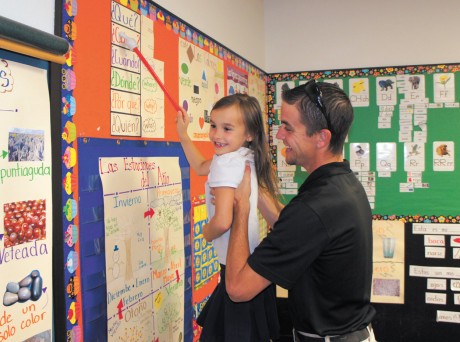 In 2000, Arizona voters passed a ballot measure stipulating that instruction in public schools be offered only in English. Bilingual teachers who had been instructing in Spanish were told to switch to just English beginning with the 2001-02 school year.

However, there was a lot of confusion based on the language of the proposition, and while some school districts did change their approach to educating their English Language Learners (ELLs), many of them continued to teach their ELL students in Spanish and English. In the end, public and educational support for the law dwindled, and it mostly remains unenforced today.

In fact, you could say that there has been a pendular swing in the opposite direction. These days, dual-language programs at elementary schools are in hot demand—for English-speaking families who want their children to learn Spanish.

Students typically spend half their day learning subjects in one language and then switch after lunch to learning in a second language. Public schools that offer these programs generally have two or more classrooms dedicated to the dual-language learning at one or more grade levels. The classes could be considered an elective, in that parents have to formally register their children for the dual-language program.

One North Central school district has been offering its dual-language program before the 2000 ballot measure, and it continues to have strong demand from families both inside and outside the district boundaries.

Encanto and Clarendon Elementary Schools, in the Osborn School District, abut each other and share a cafeteria. They also have a contiguous dual-language program that starts in Encanto’s K-3 grade levels and continues in Clarendon’s 4-6 classes. Dual-language is offered in all subject areas, and two dual-language classrooms are offered per grade level. The program was first launched at Encanto in 1998.

“More and more parents want their children to be bilingual at an early age.”Carlos Ardón, language acquisition specialist for the Osborn School District, says nearly 40 percent of the children enrolled in the dual language program are from out-of-district. In fact, he said there likely will a waiting list for those looking to enroll their kindergartener in the dual language program this school year.

“The climate has shifted, as more and more parents want their children to be bilingual at an early age,” Ardón says.

“We are the ones who have been here since the beginning, offering this program long before it became more widely acceptable. And now the reality is that it’s becoming tough to find highly qualified bilingual teachers because they are in such demand. We are fortunate that we offer a quality program here that has earned awards.”

The Arizona Educational Foundation awarded the Osborn Dual Language Program the A+ Exemplary Program Award in 2010.

The program starts in the 2010-2011 academic year for kindergarten and first grade, when the school was called the Squaw Peak Tradition Academy, and an additional grade has been added every subsequent year.

“Biltmore Prep does a great job on focusing on rigorous core curriculum while teaching in both languages,” says Clark, who is also the co-president of the Biltmore Prep Parent-Teacher Organization (PTO). “They have created strong partnerships between the parents, the teachers, and the students and they provide a supportive and a caring environment that makes the challenge of being in a dual language program a more pleasant experience.”

School officials say the program has been astonishingly successful and popular with both students and parents, from both within and outside the Creighton School District. As with most public school districts in the Valley, Biltmore Prep offers open enrollment. However, “Enrollment in the FLI Program is on a ‘first come, first served’ basis after we have honored Biltmore Preparatory Academy’s attendance area families,” explains new Biltmore Prep Principal Joel Laurin.

And most recently, the Madison School District has started offering dual-language instruction. At Madison Heights, the Spanish immersion program was begun in first grade only, and with just the science curriculum, in the 2012-13 school year.

“We saw how proficient our students became very quickly,” recalls Principal Priscilla Gossett. “You can’t achieve that kind of success with just an elective model. You have to give them more time.”

So the program was expanded to second grade, and included the subjects of science, social studies and language arts. Both kindergarten and third-grade dual-language classes are being offered on the Madison Heights campus this fall. Ultimately the fourth and final grade at the school will be added so that all grades will have the option to be in Spanish immersion for part of each school day.

Hillary Frank, a veterinarian and owner of North Central Animal Hospital, whose daughter, Jessica, 8, is in the Spanish Immersion program at Heights, says, “Jessica is able to have basic communication with Spanish speakers now, and it is amazing how well all the kids do in the classes. It is so natural for them to learn in two languages.”

To help parents understand what their children are doing in these dual-language classes, Madison Heights hosted a Spanish Immersion Festival of Learning in its multi-purpose room on April 29-30. The children performed songs and skits in Spanish for their families, with some of the children translating in English. Afterwards, the families were invited to the dual-language classrooms to see some of their children’s work.

“Children don’t go home and speak Spanish if that is not their native language, because they know most likely their parents won’t understand them,” Gossett says. “So when the parents come to events like these they are shocked and proud to see how fluent their child really is. That’s why we hold these special events, so parents can really get a first-hand look at what they are learning, ask questions, and more.”

The Madison School District is exploring what to do as these Spanish-proficient students transition into the district’s middle schools, which currently only offer Spanish as an elective course.