By Teri Carnicelli
Over a two-day period last month, teams of firefighters were seen on top of a home in the area of 38th Street and Indian School Road, punching and sawing holes in the roof, and moving in and out of the home’s interior. 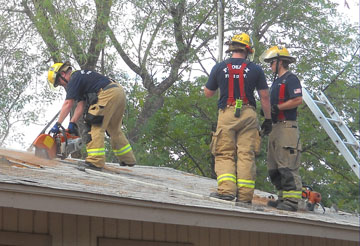 They weren’t trying to put out a dangerous fire or rescue residents trapped inside. Rather, they were practicing their skills on a vacant home slated to be torn down a short time later. The home was one of five structures on a 3-acre property acquired by Green Street Communities Inc. and planned for redeveloped into 15 new single-family homes.

“It’s the first time we’ve done a partnership like this,” explains Derek Jarr, CEO and founder o Green Street Communities (GSC). “In the past we’ve worked with nonprofit organizations like Stardust Building Supplies and Habitat for Humanity to have them come in and salvage what they can from a home before it is torn down. But this is the first time we’ve worked with the Phoenix Fire Department for a training opportunity.”

It seemed like a natural fit, so GSC contacted United Phoenix Firefighters Local 493 to see if any stations would be interested in the training opportunity. Phil Eno, Labor Relations Training coordinator for Local 493, was more than happy to accept GSC’s offer.

“When we get a building like this, it’s a luxury; it’s like a diamond to us,” Eno said, adding that it beats practicing on the plywood and props that are often used instead. While the fire department is no longer able to train on deliberately set structure fires due to new codes and regulations, there is still a lot that can be done with a full-sized building.

“We do ventilation simulations on the roof, using some of out cutting tools,” Eno explained. “We also give a short building construction overview class that ties into building safety.”

About a dozen firefighters from Station 11, at 2727 E. Roosevelt St., were able to participate over the two-day training period. Eno says that the Phoenix Fire Department would love to take advantage of more of these type of opportunities with local developers, but lately they’ve been relying on word-of-mouth to find those opportunities.

“We don’t have any public service announcements but we put the word out on the street with as many general contractors as possible that we’d love to have the training opportunity,” Eno said. “We used to have a training coordinator who would find those opportunities for us, but lost that person due to budget cuts,” he added.

GSC will continue to contact Phoenix Fire on any appropriate project it has and push back the timeline on demolition, if necessary, to allow the valuable firefighter training. “It’s a pretty cool thing to do—get some added benefit out of buildings that were going to be torn town anyway,” Jarr said. “Moving forward, we’d like it to be part of our standard practice.”

Any developers or general contractors interested in providing similar training opportunities for Phoenix firefighters can contact Phil Eno at 602-708-2411.