By Teri Carnicelli
Central Avenue still offers many historic places that take a person back to a Phoenix that existed before a light rail transported people to high-rise office buildings and large sports arenas dominated the downtown area. 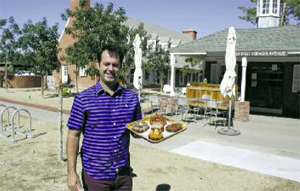 Brad Moore holds up a tray of doughnuts now available at his new business, Rollover Doughnuts. He’s standing in the courtyard he shares with the owners of Oven + Vine restaurant. The red brick buildings once housed a dentist’s home and office (photo by Patty Talahongva).

A small cluster of red brick buildings is one of those charming, throw-back places. The structures, just west of Central Avenue and south of Thomas Road, were built in the 1940s by Dr. George Vaughn, who saw the value of living and working in one place. The dentist first built a red brick house on Central and Vernon avenues. Eventually he added another building where he raised his family on one floor and saw patients on another.

Flash forward to 2011 when TJ Vernon, LLC bought the property. Tom Carmindy, one of the partners, says he “bought the place and brought it back to life.” One change was the address from Central Avenue to Vernon Avenue. Eventually he wants to formally name the quaint area Vernon Plaza.

Today the pool house is home to Rollover Doughnuts. Brad and Kat Moore of Short Leash Hot Dogs fame took over the space from friends who had opened Shine Coffee there. You can still get coffee, lattes (including one with Thai coconut infused with chili) and teas but now you can also pick up a doughnut made from brioche dough.

Rollover has 12 varieties of doughnuts, with the maple-candied bacon being a big crowd pleaser. Or you can try the orange-glazed doughnut with pistachios. Just like their hot dogs, “We take a traditional American classic and give it a twist,” says Brad Moore.

The coffee and doughnuts have proven to be popular and now on weekends Rollover offers a few brunch items, such as Kolache dough stuffed with eggs, cheese and various vegetables.

Being a former pool house, there is not a lot of space. In fact, it’s just about as big as a food truck. So if you want to sit and relax and drink your latte and eat your doughnut you can do that in the courtyard or you can step into the “living room” just across the courtyard. The spacious room, in a stand-alone building, has tables, a sofa and a few chairs to lounge in and relax. The game of Jenga and a few others sit on a shelf for customers to enjoy.

“It’s such a cool place and space to be in,” Brad says. He shares the courtyard with the restaurant Oven + Vine, which sits just to the north in the same building as the living room. There are several tables outside and awnings for shade. The bike rack there will soon be converted to a Grid Bike stand, offering people more reason to stop there.

After 13 years of operating Portland’s restaurant, a little farther south on Central Avenue, Dylan and Michelle Bethge moved to this new location. “We loved the unique brick building with its history,” explains Dylan. He said they are big fans of the adaptive reuse and really liked the fact that the dentist lived and worked in the same house for 50-plus years.

The most popular menu item is the green chili pork. The flatbreads made with Schreiner’s sausage are also popular as is the fresh burrata—mozzarella cheese and curds served with fresh bread and drizzled with aged balsamic vinegar and olive oil. You can create your own cheese and meat plate or go right to the baked pasta dishes. The restaurant offers several vegan, vegetarian and gluten-free items, including some desserts.

The Bethges brought some of their staff from Portland’s to this new location, so you’ll see a few friendly faces, just like at Rollover Doughnuts where some of the friendly baristas stayed on from Shine Coffee.

You can peruse the menu for Oven + Vine at www.ovenandvine.com. Rollover Doughnuts is on Facebook and Twitter.