Salsa flights mix it up at tasty Urban Taco

By Patty Talahongva
Tim Perkins has a home again. After working in the food and beverage industry for the last 15 years, he and his wife, Lisa, earlier this year opened Urban Taco in the spot formerly occupied by Europa Pastry Café, 6522 N. 16th St.

It’s home because it is where his heart is—owning his own restaurant. His last restaurant was Timothy Michael’s Hideaway near Thomas Road and 44th Street. 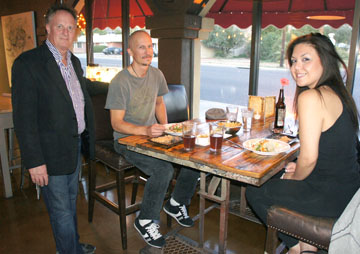 The couple had their eye on the 16th Street corridor, knowing they wanted to open a restaurant in the vibrant area. When they saw the location was available, they jumped at the opportunity. “I knew it was going to be a good spot,” Tim says.

The name for the place came from a few brainstorming sessions. The menu came from all the compliments and requests Tim had for his salsa recipes.

“If you include the guacamole, we have 10 different salsas,” he says proudly. “I’m in there every morning, making the salsa. I like to cook.”

Tim was born and raised in Phoenix and has been around strong Mexican food influences all of his life. While he loves the heat of chilies, none of his salsas are so hot they’d make you want to reach for a glass of milk to cool down.

Octopus and shrimp tacos are customer favorites. Burritos come either wrapped or in a bowl; if you still want the tortilla on the side, just let your sever know when you place your order.

You can select flights of salsa to go with your tacos so you can sample several flavors at one meal. Street tacos come on 4-inch tortillas and you can customize your order. The Gourmet Tacos come on a 6-inch corn tortilla.

Her actual day job is an art dealer. At the restaurant she wears several hats—whatever needs to be done, including cleaning off tables, she admits with a laugh. But she also spends time in the kitchen, making all the desserts.

On Taco Tuesdays, you can get $1.50 Street Tacos. Happy Hour is Monday through Saturday from 4 to 7 p.m. There are food specials and you get $1 off bottled beer and cocktails. You can also enjoy glasses of wine and margaritas for just $5. Tim also makes his own sweet and sour mix for the ’ritas.

Recently, Urban Taco launched “Madison Mondays.” Every Monday from 5 to 9 p.m., the restaurant donates 10 percent of the night’s sales to the Parent Teacher Organizations (PTOs) at Madison No. 1 and Madison Heights.

“We have a daughter who goes to Madison No. 1,” says Tim. “Over the years we noticed they kept sending home fliers for other promotions.” So when Tim and Lisa opened their own place in the neighborhood, they decided to dedicate one night a week to help the two groups’ fundraising efforts.

You don’t have to bring in any special flier or even have a child attending either school. If you just come in and dine on Mondays after 5 p.m., you will contribute to the schools. So far the benefit nights have been well received. The couple plans to keep this fundraising night going through the end of May 2015.

The eatery also apparently is a good place to visit with neighbors. “Nothing makes me happier than when I see one person jump up and say ‘hi’ to another person,” Lisa says, adding, “We’re becoming the neighborhood restaurant.”

It’s their second home, and they also have family working there. “I’m the chef, my brother works in the kitchen and our son works here part time,” Tim says. A nephew also rounds out the team, along with several of their son’s friends.