Home / Cafe Chat / Hopper grateful for all his ‘luck’ in Phoenix

Hopper grateful for all his ‘luck’ in Phoenix 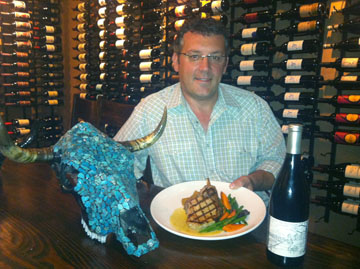 Nate Hopper, managing partner at Sierra Bonita Grill, shows off one of three private dining rooms. An entree that will be new in September is the bone-in grilled pork chop in a vanilla bean Serrano chili butter and served with Oxacan sweet mashed potatoes. Also popular are local wines including this red table wine from Paige Springs Cellars (photo by Patty Talahongva).

In 1997 Nathan Hopper, a 21-year-old New Yorker who had recently been asked to “leave college,” as he puts it, came to Phoenix because he’d read it was a fast-growing city with lots of opportunity.

“I didn’t have any money,” he recalls, but he soon found out his gamble would pay off. In a chance meeting at his apartment complex, he learned of a restaurant that needed a bartender.

“I told them I could bartend, and I lied,” he admits. The owners quickly figured that out, and decided to teach him. The place was called Our Gang Cafe, now Il Posto. Eventually he moved from bartending to managing the restaurant, training on the job the entire time.

During his four years there he waited on one particular man, Sheldon Knapp, owner of Phoenix City Grille, who would frequent Our Gang. Hopper decided to leave because he says he wanted a change and he joined Knapp at his popular Central Phoenix restaurant.

In 2003, Knapp bought the property 6933 N. 7th St. that became Sierra Bonita Grill, and in preparation for the new menu he sent Hopper to Oaxaca, Mexico, to an immersion cooking school. The two opened the Southwestern-style eatery in 2005. Five years later, Knapp sold the restaurant to Hopper and two partners.

“Sheldon is one of the hardest-working guys,” says Hopper. “He taught me what I know in the restaurant business.”

Since taking over Sierra Bonita Grill, Hopper has tweaked the menu, along with the building’s look and the art on the wall. “I enjoy having the responsibility and the freedom to create new dishes, give the restaurant a new look or simply, what I like to do most, interacting with our guests,” he says. Larry Debus and Bill Gould are silent partners in the restaurant but it’s up to Hopper to maintain the day-to-day operations.

As for the food—where else can you try piñon pancakes, or a southwest benedict with panko-crusted poached eggs on top of a green chili beer biscuit. “I learned how to cook it in Dutch ovens out on the trail,” explains the New Yorker-turned cowboy who has come to enjoy long horse rides exploring the Arizona scene.

Hopper says the most popular dinner is the buttermilk chicken with mashed sweet potatoes and black pepper gravy, followed by a pork osso bucco that comes with creamy polenta and hatch green chili. The average cost for lunch is around $15 and dinner will cost between $25 and $30.

“I promised Rose Mofford, who ate here every night for almost eight years, that I would name something on the menu after her.”One of the signature appetizers are the “Hoppers Poppers,” named after the owner and featuring halved jalapeños filled with a blend of four cheeses and broiled on a specially made cast-iron skilled. And in homage to one of his most famous diners, the “Mofford Muffins” are named after former Arizona Gov. Rose Mofford.

“I promised Rose Mofford, who ate here every night for almost eight years, that I would name something on the menu after her. They are on the brunch menu and change weekly.” In fact Hopper says he sends dinners to Mofford on a weekly basis.

Sierra Bonita also caters to vegans and vegetarians by adjusting items already on the menu. Diners can make special requests for dishes and, if the ingredients are in the kitchen, the chefs will accommodate the request.

“My bar manager, Kenny Ennesser, realized he had a gluten allergy last year,” recalls Hopper. That prompted another change to the menu: gluten-free items. “It’s gotten a lot more reception than I thought it would,” says Ennesser, who has worked with Hopper for nine years.

Like most locally owned restaurants Hopper says he tries to source locally, including meats from Schreiner’s Fine Sausage in Phoenix, breads from the Bread Connection in Chandler, and one desert—the buttermilk pie—is made in Glendale.

Sunday brunch is very popular and reservations are recommended. There is no kids menu, but the chefs can make things like macaroni and cheese or quesadillas upon request.

More than 19 Arizona wines are featured as well as many Arizona craft beers. There are three private dining rooms downstairs that don’t cost anything to book. There is an elevator in case you’d rather not take the stairs.

Hopper plans to rearrange the artwork on the walls and offer some for sale. He’s looking for more Southwestern-themed art. Interested artists can submit photos of art by e-mailing info@sierraboniatgrill.com.

Hopper never forgets how lucky Arizona has been for him. “This is my home. The desert is beautiful. I swear from the day I got here someone has put their arm around me and helped me. I just feel really lucky!”