By Patty Talahongva
Most owners have enough on their hands with the opening of one restaurant, but the De la Cruz brothers just couldn’t pass up two great locations in Phoenix. So, they opened two restaurants in the North Central area—all in the last six months. 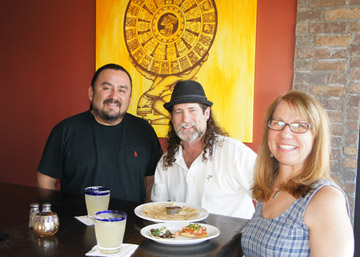 Obed and Michael De la Cruz have been in the restaurant business for nearly 30 years, so the challenge of opening two restaurants seems to have been taken in stride. They come from a family of food experts, and if you’ve ventured into the East Valley most likely you’ve eaten at one of the four family restaurants: El Sol Mexican Cafe & Bakery, El Zocalo Mexican Grill, Mangos Mexican Cafe or De la Cruz Bistro.

A self-described high school drop out who never went to college, Obed says he’s found his niche with the restaurant business. In 1978 his family owned the only Mexican restaurant and bakery in the entire state of Utah. Then in 1983 they opened a restaurant in Salt Lake City. His parents later moved to Arizona due to his mother’s health.

“They moved in February 1987 and I visited at Easter and never went back,” he says. “I fell in love with Arizona.”

The family businesses were sold in Utah and in 1988 the De la Cruz family opened El Sol, a new restaurant in their new home town, Chandler.

Today, with his wife Panfila, his brother Michael and other family members, they own and operate all six De la Cruz restaurants.

Why the move to central Phoenix? Obed explains that his older brother, Michael, lives in the area and he’s the one who spotted the locations and convinced Obed to bring the family business into Phoenix.

“It was not even three weeks after I signed the deal with this one (Mejico) I get a call from my brother and he says the old Fry Bread House is up for rent.” Michael wanted Obed to come look it over as a potential new restaurant site, but Obed was reluctant since his plate was already full with Mejico. But his brother was persistent so Obed agreed to visit the site. He immediately saw the potential and signed the deal to rent to space.

At Phoenix Burrito House, they decorated the walls with old Mexican lottery artwork. He says they get a lot of compliments from diners who remember their parents playing the lottery when they were kids.

“It’s a great place for a good, fresh burrito if you’re on the go,” says Obed. He describes the breakfast burritos ($4.75) as “killer” and says they are served all day. Right now the Burrito House opens at 10 a.m. but eventually the doors will open at 7 a.m.

Michael runs the day-to-day operations at the Burrito House. Besides great burritos you can also try the quesadillas ($4.75-$7.50), and of course the tortillas are homemade at their East Valley bakery. “It’s great quality food for a reasonable price,” adds Obed. Tacos and salads round out the simple menu.

Just a few miles east the brothers’ other restaurant, Mejico, offers a completely different dining experience. A stylish and intimate place, Mejico is naturally bright with huge windows along the east and north walls. The eatery comes alive at night for a cozy and romantic dinner.

Obed and his family did all the renovation work to create the special vibe at Mejico, with bright colors, decorative ironwork and interesting wall art on the exposed natural brick. He purposely picked the name Mejico with the old spelling. Once Spain conquered the region they changed the spelling to Mexico. Obed says it’s his nod to the original inhabitants of the area. “I get a lot of compliments on the name.”

There are 10 items on the lunch menu but you can order anything from the full menu. Some popular dishes are the Soft Tacos ($9) or the Shrimp & Chorizo Burrito ($12).

Dinner selections range from $17 to $23 for the Camarones Ala Diabla; sautéed shrimp in a spicy red chile sauce. A must try is the Shrimp Relleno ($22) and of course the dessert, flan or a sopapilla drizzled with honey, butter and powdered sugar ($6).

Happy Hour is 3-6 p.m. Monday through Friday and you can get $3 beers, $4 well drinks or $5 Skinny Margaritas. You also can get half off any regular menu appetizer. Mejico also has a wide variety of domestic and imported beer or wines from California, Argentina, Chile and Mexico, as well as an ever-growing selection of tequilas.

This is not the typical Mexican food restaurant with sombreros and serapes draping the walls. You won’t get food drenched in cheese either. You’ll get the food the De la Cruz family has been serving successfully for nearly 30 years.

“I want to be that neighborhood, friendly fun vibe,” says Obed. He sees a late night menu in the future and a Reverse Happy Hour. Right now the restaurant seats 50 people. A future patio on the east side of the building will add space for an additional 20-25 people. “I want it small. I want it quaint,” he says. “Absolutely, we are a family business.”