Café Chat: A little social service with your meal

By Patty Talahongva
It’s not just a coffee shop, nor is it just a cool, locally owned restaurant. The Refuge, located at 4727 N. 7th Ave., is both—but it’s also a place where you can pick up unique handcrafted gifts and locally roasted coffee, or you can get a glass of wine or beer in the evenings. And the money you spend benefits local refugees and social service programs that aid the disadvantaged. Catholic Charities owns and operates The Refuge. Steve Capobres, vice president of business development, says the board wanted to start doing more social enterprises. At first they considered opening a world market.

“We were also looking to other economic development that ties to Catholic Charities’ mission,” he says. 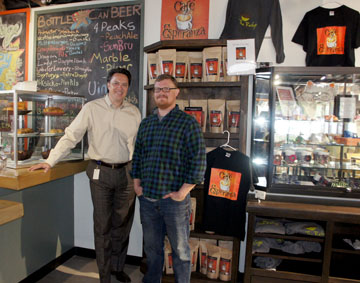 Steve Capobres, left, vice president of Business Development for Catholic Charities, and John Strawn, manager of The Refuge, are proud of the social service-oriented eatery that sells its own locally roasted coffee, fresh-baked pastries, and craft items created by refugees living in Phoenix (photo by Teri Carnicelli).

“Because we work with refugees, the idea was to tie them to this building.” Artwork created by refugees is displayed on the walls of the bright and airy eatery, and all of it is for sale. Catholic Charities works with refugees from more than 60 countries … hence the name of the restaurant. The artists share a small percentage of their sales with the nonprofit organization.

Catholic Charities also has partnered with other local nonprofits that serve refugees, allowing them to display and sell their wares, including hand – made purses, aprons, cup cozies, scarves and more, with profits shared among the refugees, their host nonprofit group, and Catholic Charities. In all instances, the refugees receive the bulk of their sales profits.

The building is right next door to the office of Catholic Charities, which renovated the former Melrose Flower Shop and opened The Refuge on Oct. 16 last year.

The coffee served at The Refuge, under the brand name Café Esperanza, also is an economic venture for Catholic Charities. Capobres started that business even though he admits to knowing next to nothing about coffee. In fact, the local coffee roaster is the one who actually suggested opening a coffee house. The Refuge has become more than that with it’s breakfast menu, lunch and dinner offerings and appetizers for a quick snack, as well as a rotating selection of microbrewed beers and boutique wines.

“He’s truly amazing and he makes his own mayonnaise.”

“You can customize what you’re going to eat,” Strawn adds. “People eat family style, communal, so a group of people can order four or five items and enjoy themselves maybe with a beer, wine or coffee.” Coffee and a breakfast sandwich will run between $6 and $7. A sand – wich and salad at lunch is around $10. The pulled pork dinner is a customer favorite and about as fancy as the menu gets because the kitchen is fairly small. Freshly baked goods such as banana bread and chocolate chip cookies are available as is the classic French dessert, clafouti, a layer of fresh fruit with batter made into a cake. “Basically it’s whatever Chef Eddie feels like baking,” admits Strawn.

“There’s always something new and fun.”

Other items like the scones and muffins come from “Never Enough Sugar,” a local bakery. Strawn loves the espresso but also encourages people to branch out. The Lavender Latte is quite popular, as is the Cayenne Mocha.

“We have to ask people their heat levels when they order,” he cautions. There also is a nice selection of hot teas. Some favorites include Blue Lady Black, which has lavender and orange zest, Raspberry Chamomile and Moroccan Mint Green tea. During Happy Hour, 3 p.m. to clos – ing, there are discounts on draft beer and wine. Also, 7th Avenue merchants get a 15-percent off discount card. Capobres says customers have told him the atmosphere is also a draw.

“It’s not really a bar, it’s a nice place to have a conversation” and a drink in a laid- back setting. There’s even a conference room for private meetings.

“It’s available at no charge,” says Strawn. The room seats up to 18 people and has an overhead projector for presentations.

Strawn adds, “We just want to have a great place people want to come to and feel like they’re giving back to the community.”

And every purchase at The Refuge achieves that goal. The Refuge is open 7 a.m. to 8 p.m. Monday-Thursday, 7 a.m. to 9 p.m. Friday-Saturday, and 7 a.m. to 4 p.m. Sundays. You can follow them on Facebook or Twitter or visit www.therefugeaz.com, where you’ll find a list of upcoming cultural events, live music nights, and more.

Want to make a difference? If you are looking to make a differ – ence with your dining, two other restaurants donate a percentage of earn – ings each month. Hula’s Modern Tiki restaurant, 4700 N. Central Ave., offers Mahalo Mondays. When you dine there on any Monday, Hula’s donates 10 percent of all proceeds to a different charity each month. In May the Ronald McDonald House will benefit. Nearby at Maizie’s Cafe & Bistro, 4750 N. Central Ave., 10 percent of its proceeds on Wednesdays goes to a local charity.