Before high schoolers decked out in their fanciest duds took the gym floor to dance, and before art lovers and craft shoppers strolled along Central Avenue looking for bargains, a group of volunteers spent a couple of hours making the area free of litter and graffiti. 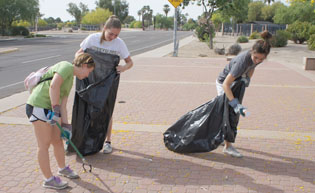 Sunnyslope High School held its prom the night of April 12, the same night that the Sunnyslope Art Walk returned to several parking areas and dirt lots along Central, from Dunlap south to the canal. But prior to both events, more than 40 volunteers took to the sidewalks, medians, and landscaped lots, cleaning up trash.

They were part of the Sunnyslope Graffiti Fighters, a group that meets once a month to beautify the Sunnyslope area and in some cases paint out graffiti. They are supervised by volunteer Genie Smith, who is a city of Phoenix Blight Busters program graduate, and coordinated by Arizona State Rep. Kate Brophy McGee, who represents District 28, which includes the Sunnyslope community.

“It is a partnership of neighborhood leaders, Sunnyslope High School student leaders—including Key Club and National Honor Society—and the city of Phoenix Neighborhood Services Department (NSD),” McGee explains. “We go out once a month when the kids are in school and paint out graffiti and pick up trash in the neighborhoods surrounding the school.”

Volunteers identify where graffiti needs to be eradicated and call up Dave E., who has turned and old SUV into a graffiti-busting tool, complete with dozens of paint cans, rollers and more. The rest of the group tackles the trash, using heavy-duty gloves, trash-pickers, and trash bags provided by NSD.

Students are broken up into groups, several of which become designated “tunnel rats. They help clean out the under-street tunnels at 7th, Dunlap and Central avenues, as well as 7th Street and Northern Avenue.

“We make a very big difference for our neighborhood,” McGee says. “We have had participation from neighborhood leaders stretching south of Northern Avenue, as well as students from Madison Schools and even the Arizona School for the Arts.”

On this particular occasion, a surprising number of Sunnyslope High students turned out, despite the fact that prom was just a few hours away. Eight Key Club students were on hand, along with their club advisor, Tom Birk, as well as 27 students from the school’s National Honor Society. Other volunteers included local business owners, and even a first-time family group: Joe Labrie and his daughter, Elizabeth, 14, and son, Christopher, 16.

“It’s a great experience for them, learning about giving back to the community,” he said. “Plus, it’s pretty good exercise.”

“This is the largest turnout we have ever had,” McGee says. “We actually ran out of gloves and trash-pickers. The crews worked very hard.”

To learn more about the Sunnyslope Graffiti Fighters, visit their Facebook page at www.facebook.com/sunnyslopegraffitifighters.