Tour tickets for the historic Tovrea Castle at Carraro Heights are on sale now for the 2015 season. And while it may be hard to plan that far ahead, be warned: tour tickets are limited and generally sell out fast! 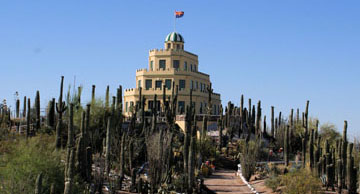 Tour tickets for the historic and unique Tovrea Castle and its restored cactus garden are on sale now for the 2015 season
(photo by Sharon Anck).

In 1928, Italian immigrant Alessio Carraro sold his San Francisco sheet metal business and moved to the Phoenix area, where he purchased 277 aces of creosote-studded desert to build his “resort castle.” He picked a small rise to build his wedding cake-shaped castle and dubbed his future development “Carraro Heights,” a name still used today for the site.

According to the city of Phoenix website, “Carraro’s dream for the property was quickly shattered in 1930 when adjoining property owners began constructing sheep and cattle pens to supply a nearby meat packing plant owned by the Tovrea family.”

Carraro ultimately sold the property to Della Tovrea in 1931. She lived in the “castle” until her death in 1969, at which point the Tovrea Family Trust assumed control of the property.

Visitors can see both restored to their former glory during these seasonal tours. Tours of the Tovrea Castle at Carraro Heights, 5025 E. Van Buren St., take place twice in the morning Fridays through Sundays, from Jan. 9 to June 28, 2015. They are approximately two hours long and include the castle’s main floor and basement, grounds and cactus gardens surrounding the castle. Tickets are $15 for adults, $10 for children ages 2-12, and $13 for seniors, members of the military, and students. Admission is free for children younger than 2.

Guests are greeted by Tovrea Carraro Society volunteers at the Visitor Center and taken through the Carraro Cactus Gardens on a tram with a docent. The tour winds through the beautiful 44 acres, viewing the outer buildings, before arriving at Tovrea Castle.

The tour is ADA accessible for those using a wheelchair or walker. Electric scooters cannot be accommodated. Any other special arrangements should be arranged at least two weeks prior to your tour date and time.