After less than a year of construction, Phoenix Country Day School officially opened its new Aquatic and Tennis Center on Aug. 14 on campus, located at 3901 E. Stanford Drive. 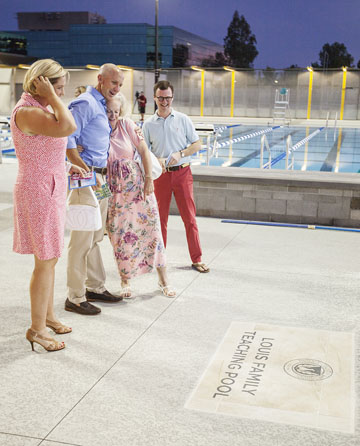 From left: Amy and Tim Louis view the “Louis Family Teaching Pool” marker located on the ground adjacent to the new pool at the Phoenix Country Day School Aquatic and Tennis Center, along with Gay Wray, a founder of the school, and C. Ryan Joyce, PCDS’s director of Advancement (photo by Largo Photography).

It’s not only good news for the private, independent school serving grades preK-12, but also for Phoenix area swim clubs who were displaced when the Dottie Boreyko/Brophy Sports Complex, near 29th Street and Campbell Avenue, closed in March of last year to make way for a new housing development.

Board members of the Phoenix Swim Club secured a long-term commitment that will make PCDS’s new aquatic facility the club’s new home.

“Remaining centrally located, we will be able to fully accommodate our entire club, from age-groupers, seniors, all the way through Masters, as well as our current partners like the Special Olympics and local high schools at the new facility,” said Steve Schramm, vice president of the Phoenix Swim Club Board of Directors. Also coming on board with Phoenix Swim Club is the Arizona Marlins club; the two groups will work in unison to provide quality instruction for swimmers and divers of all ages and levels.

The space is highlighted by a shaded seating area for spectators, and a 5,000-square-foot shaded area for swimmers and instructors on the deck.

The project is a part of a greater campus expansion at PCDS that will soon include an Indoor Athletic Complex, Walk of Champions, and renovations to the current gymnasium. The total cost of the Aquatic and Tennis Center is approximately $8.8 million, and was made possible through the philanthropy of the PCDS Board of Trustees and Friends of the School.

All club and after-school swimming, diving, and tennis will occur around the scheduling of PCDS physical fitness and athletic programs, which will always be the first priority, school officials say.

The new aquatic center gives PCDS the ability to offer a program that is world-class and available to all interested PCDS student-athletes. The connection with local clubs enables PCDS to open its doors to the community and to make a positive impact.

The architects included Knoell and Quidort, and Architekton. The builder was Haydon Building Corp.