Peggy Baze may not have been born an artist, but after picking up a paintbrush for the first time in 2013, it didn’t take this Phoenix empty nester long to realize she had an artistic gift. 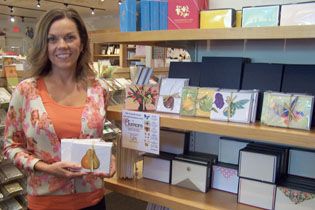 Artist Peggy Baze, who turns her large canvases into packages of note cards for charity, has them available for sale at the Write-Ons, Etc. stationery store at 7th Street and Rose Lane (photo by Teri Carnicelli).

Baze, who lives and raised her family in North Central Phoenix, says her discovery happened purely by chance after she and some girlfriends attended a social painting class. From there Baze was hooked.

She watched a video on YouTube and began painting in her home. Her first paintings consisted of the various fruit, but it quickly advanced to the more intricate and much larger paintings, such as the butterfly and hummingbird. It was shortly thereafter she came up with the idea to do it all in the name of charity.

“Every time I begin a painting, I don’t know where it’s going to take me or how I’m going to finish, and I’m always amazed at the end result,” said Baze. “Then it just came to me one day. I had the magical ‘aha moment’ that I can use my art for the greater good.”

A year later, Baze started Artful Giving, which is dedicated to using art to help struggling families in the community. She’s turned her original artwork (acrylic on canvas) into note cards and she’s donating 100 percent of the proceeds to UMOM’s Child Development Center, where she also volunteers her time.

“It’s such an honor to be the pilot program of Artful Giving,” said Kresta Horn, director of Children and Youth at UMOM. “Peggy has been involved in the Child Development Center at UMOM for quite some time now. Her artwork is a blessing to our children. I’m so thrilled to be a recipient of Peggy’s heart.”

“It’s my goal to continue to use my artwork to help create sustainable revenue for selected charities that are making a difference in our community,” said Baze.

Baze’s note cards sell for $15 for a package of 12 cards. The cards can be purchased online at www.Artful-Giving.com and www.umom.org/notecards. They can also be purchased at Write-Ons, Etc. stationery store at 7th Street and Rose Lane. She’s working on some fall-themed note cards and hopes to have them available in the store and on her website by early November.