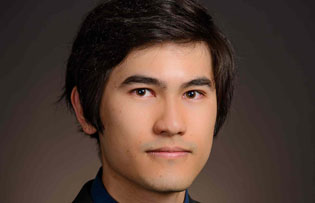 North Central native Ryan Muller, a graduate of North High School who is majoring in biochemistry and molecular/cellular biology, is helping develop biosensors for early detection of infectious diseases. He will receive $7,500 a year for up to two years.

Muller is a resourceful and motivated student who began doing research at ASU while still a student at North High, and again the summer before his freshman year. Xiao Wang, assistant professor in the School of Biological and Health Systems Engineering, remembers that even though Muller was initially the youngest member of the iGEM synthetic biology research team, others quickly began to rely on him.

“His ideas were fresh, innovative and motivating to the team,” says Wang. “In fact, the first day he volunteered in my lab, without any prior experience, he implemented a strategy to effectively screen for bacterial colonies that contained the correct transformed plasmid. The team began to rely on his resourcefulness.”

In subsequent years Muller continued working on the team and was a key player in helping them develop a portable, low-cost biosensor system to detect pathogens in water supplies. They won a gold medal and a spot in the international championship event for one of the world’s premiere student engineering and science competitions.

Interested in expanding their work, Muller and others assembled a team of undergraduate researchers to seek additional funding. Last year they were grand prize winners at the ASU Innovation Challenge and at the ASU Edson Student Entrepreneur Initiative. Their fledgling company, Hydrogene Biotechnologies, may help cut down on water-borne diseases that can kill, such as acute childhood diarrhea.