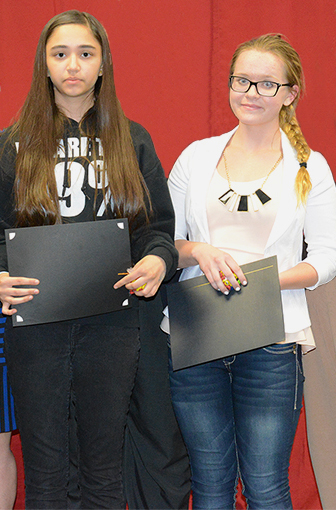 Receiving certificates and cash awards for their winning entries in the 2014 Anti-Defamation League of Arizona’s Echoes and Reflections Moral Courage Essay contest are, from left, Anjali Moore of Madison Meadows, and Becca Webb of Madison No. 1 (photo courtesy of the Madison School District).

In its eighth year, the contest, which is open to all Arizona seventh through twelfth graders, uses the lens of the Holocaust to analyze moral behavior and educate students about contemporary issues. Study of the Holocaust helps students develop an understanding of the ramifications of stereotyping, prejudice, racism, and anti-Semitism in any society.

Through learning about Rescuers during the Holocaust, The Moral Courage Essay Contest invites the writer to articulate the benefits of standing up against injustice.

The four students received certificates of recognition and cash prizes. For more information, or to read the winning essays, visit www.arizona.adl.org/news.