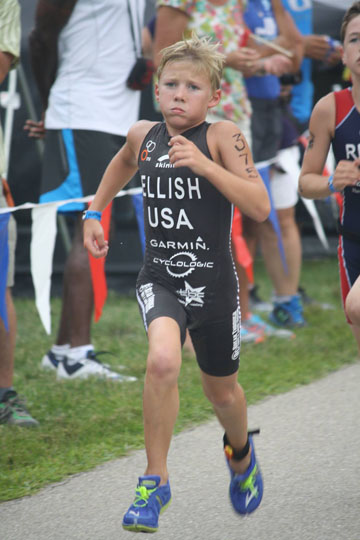 A triathlete taking sixth in the nation is a big deal. But when that triathlete is only 9 years old, it is a huge deal!

That is what North Central Phoenix native Nolan Ellish did at the USAT Youth Elite and Junior Elite National Championships, held on Aug. 2 at the Voice of America Park in West Chester, Ohio. The Youth National Championship consisted of a 100-meter open water swim in a lake, which transitioned into a 5-kilometer bike course and culminated with a 1-kilometer run. Nolan finished the race in 18 minutes and 6 seconds.

To earn this achievement, Nolan trained for this event all year by logging as many as 20 hours a week preparing. He woke up most days at 5 a.m. and went for a bike ride to a local high school track for a run workout, then rode his bike home. Later in the day, he completed a pool workout.

He also competed in many local and regional competitions in anticipation of this prestigious annual event.

“Nolan had the goal of giving this race maximum effort and finishing strong, which he did with a smile,” said his training partner—and mom—Cortney Ellish. “He represented himself as a talented triathlete and a good sport.”

Nolan is beginning fourth grade at All Saints Episcopal Day School. But school won’t slow him down—he is still in training, this time for a couple of local, shorter-distance races. “We’re really proud of his strength and his determination,” dad Jeffrey Ellish says.