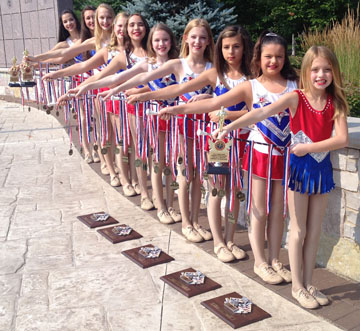 Pictured with their winning plaques and medals are the 10 members of the Phoenix Superstar Twirling Team, trained by longtime North Central resident Becky Hewitt (submitted photo).

This was a new experience for three of the 10 members of the Phoenix Superstar Twirling Team, but not for their coach, North Central resident Becky Hewitt, who has been coaching and competing for the past 39 years.

Assistant Coach Sarah Ewart, who was on a team herself since the age of 6, had to fill in for one of the senior twirlers who didn’t make it this year because of an illness.

The girls trained once a week during the school year with the Arizona Twirling Athletes, a nonprofit youth organization, and then attended a four-day twirling camp at Yavapai College in Prescott and commenced with three-hour daily practices in the gym during June and July.

The rigorous schedule paid off when the team came home with 30 medals for individual events, which placed the girls in the top 10 in the country. Awards included four first places in the flag twirling competition by Madysin Hewitt, Rachel Rodriguez, Emily Tutnick and Alexis Mendez. Five of the Superstar twirling and dance teams also placed in the top 10 in the country, and the Senior beginner twirl team captured the first place title for the second year in a row.

Hewitt will open a program for beginner twirling students between the ages of 6 and 16 in September in five different local school districts. For registration information, call 602-997-0522.