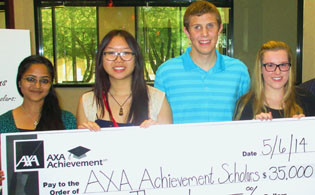 Ashton is one of 52 students—one from each state, plus Washington, D.C., and Puerto Rico—who have been awarded scholarships of $10,000. Of those 52 students, 10, including Ashton, were chosen to receive an additional $15,000 scholarship award.

All of the recipients are students who demonstrated ambition and drive, determination to set and reach goals and the ability to succeed in college.

“Max, who is blind, has taken on amazing feats that have tested his mind, body and spirit—such as climbing Mount Kilimanjaro and swimming to Alcatraz—all in the name of raising more than $250,000 for the Foundation for Blind Children (FBC),” said Philip Kim, retirement benefits director at AXA Advisors Southwest and office champion of the scholarship program.

When he was just 14, Ashton participated in a grueling 15-hour rim-to-rim hike at the Grand Canyon. It took him and his team a little more than 15 hours to complete. That hike, held in October 2010, helped raise more than $40,000 to fund the FBC’s summer recreation program.

“Some of the challenges he has faced include altitude sickness, subzero temperatures, fatigue and doubt. But it was all worth it to help so many children through the Foundation,” Kim added.

Marc Ashton, Max’s father, is CEO of the Foundation for Blind Children, based in North Central Phoenix at 12th Street and Northern Avenue.

“Confidence comes from success. Success comes from trying. The will to try comes from within. I am redefining standards,” says Ashton, for both himself and other youth who struggle with visual impairments.